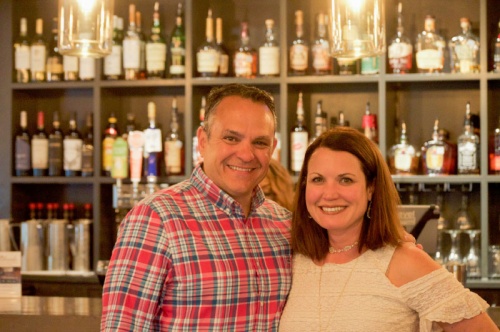 Allison and Blake Notgrass have expanded their restaurant since it opened two years ago.

More than two years ago Allison and Blake Notgrass said they  were managing prime restaurant real estate owned by Allison’s father in downtown Round Rock.

Several months into shopping the property to prospective tenants, the Notgrass family said they had a moment of clarity and decided to open a restaurant of their own.

“What if someone else opened a restaurant and had success when we had the opportunity and did nothing?” Blake said.

URBAN eat.drink, the Notgrass’ restaurant, celebrates its two-year anniversary in May after carving out a foothold in downtown Round Rock’s culinary scene. The contemporary American cuisine restaurant has since expanded to include a rooftop bar and event venue that opened in December.

The Notgrass’ vision was for Urban eat.drink to provide a unique dining experience they felt was not being provided in Round Rock, the couple’s lifelong hometown.

“[Customers] can get a steak and really nice cocktails, but they’re not breaking the bank,” Allison said.

At the time of the restaurant’s opening the Notgrass couple had very little combined restaurant experience, though the couple has extensive business history in the community. Blake has worked at Dell Inc. for the past two decades while Allison ran her own Round Rock-based photography studio.

Recently, though, Allison had to transition to URBAN eat.drink almost full time due to the restaurant’s success and expansion.

Since the restaurant’s initial opening, the Notgrass family has opened a rooftop bar and lounge that serves an expanding menu of gourmet tacos and appetizers. The Rooftop at Urban offers scenic overlooks of Round Rock’s landmark water tower and St. William Catholic Church’s parish and is just blocks away from the city’s bat bridge, meaning customers can watch the bats leave the bridge to hunt at dusk.