San Marcos Planning and Zoning commissioners tabled a recommendation vote on a proposed single-family development in San Marcos on Tuesday.

contribute today
A developer is seeking to build 137 single-family homes adjacent to the Majestic Estates subdivision on Old RR 12.

Called Mystic Canyon, the development is proposed on 56 acres on land that was previously annexed into the city and is currently vacant. The developer is asking for a zoning change from future development—the zoning designation automatically given to annexed land—to single-family zoning.

The land is located northwest of the Majestic Estates subdivision, also known as the Franklin Square-Bishops Crossing neighborhood and the Greater Castle Forest neighborhood. According to Hays Central Appraisal District data, it is owned by Michael and Debra Moffitt and was appraised at $696,380 this year.

If developed, the site would be accessed via Meadow View Drive and Stonehaven, which dead-end into the property. A road connection to Old RR 12 will likely be required to meet fire code, according to planning staff. David Tidwell, who is co-developing the property with Jim Ladner through the company Kali Kate Services, said land to build the road is currently under contract.

Several residents who live on Stonehaven—the street abutting the proposed subdivision—raised concerns about building on the Edwards Aquifer Recharge Zone and potential water runoff on Tuesday when the planning and zoning commissioners considered the zoning change. Residents also said they had issues about construction noise and cut-through traffic.

“To me it seems like an awful waste of green space that we have back there,” resident Greg Clayton said.

Debra Kilpatrick has lived on Stonehaven for 10 years and also opposed the development.

"I don't think its a good idea to have it built up on," she said. "The city needs more green space, and that should be an ideal space to have it.”

If Kali Kate Services had submitted an application for a zoning change after Code SMTX was approved, the company would also have been required to hold a neighborhood meeting before going before the planning and zoning commission.

While the tract of land is located in the Purgatory Creek watershed and is within the boundaries of the Edwards Aquifer Recharge Zone, all development will be required to meet the more stringent environmental standards found in the newly adopted Code SMTX. Parkland dedication will also be required to meet the standards of the new land development code.

According to Carpenter, staff received 12 phone calls on the proposed rezoning, six of which were regarding opposing the rezoning. One letter of opposition was also submitted.

Commissioners ultimately voted to postpone action on the rezoning recommendation for one month to give the developer time to brief neighbors surrounding the property on his plans. Ladner did not have a presentation for commissioners and said he was relying on planning staff to outline his proposal.

"I hope the applicant will realize the urgency in having more communication with the neighborhood and more information about the intended use," Commissioner Angie Ramirez said.

Commissioner Lee Porterfield was the only member to vote against postponing the rezoning recommendation. He said the commission should embrace a developer who is only looking to build single-family homes.

"I think that’s one of the key things we’re looking for as far as what council has been directed and as far as Vision San Marcos," he said, referring to the city's comprehensive plan. 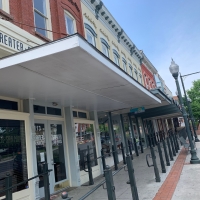 Cases rise by four in Hays County on Sunday