H-GAC's 2045 Regional Transportation Plan considers public safety, transit services and other projects for the next 25 years 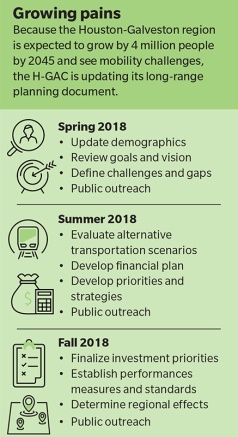 The Houston-Galveston Area Council, a metropolitan planning organization, is in the midst of updating its regional transportation plan for 2045, soliciting community feedback before adopting an official plan in 2019.

“The public is our best, unpaid consultants,” said Alan Clark, H-GAC director of transportation planning. “We’re using this [public forum] to learn about things that we don’t know. Our area is growing so fast. Problems like congestion are occurring in areas that, quite frankly, are relatively new.”

Initial comments call for improvements in public safety, traffic congestion and flood mitigation, Clark said. Most of Fort Bend County’s farm-to-market roads are concerning due to rapid population growth. Both the county and the Houston-Galveston region should anticipate significant population increases by 2045, he said.

The 2045 Regional Transportation Plan will assess long-term needs and guide prioritization of projects based on feasibility and available funding, Clark said. Project ideas worthy of consideration include elevating and depressing roads, exploring innovative pavement materials and establishing a commuter rail. If these investments are not identified now, implementation may become more difficult later on because many projects require significant commitment from local government.

“Another component of our plan talks about how can we operate what we have more effectively,” he said.

This may mean an expansion of existing services. Census data indicates a need for bus services in the unincorporated areas of Mission Bend and Four Corners in Fort Bend County, as well as some parts of Stafford and Missouri City, said Alan Rodenstein, H-GAC senior transportation planner.

Already, H-GAC is preparing to finalize a program to alleviate traffic congestion and reduce accidents on freeways inside the city of Houston.

“We’re going to be starting a service, which will tow stalled vehicles from the freeway lanes to a nearby location off the freeway,” Clark said. “We haven’t announced a start date yet. We’re just signing the contracts to work with the city of Houston, and we’re working with Harris County. It’s a multiagency effort.”

The program is anticipated to begin in the summer and once it is implemented, H-GAC will consider expanding it to adjacent municipalities like Fort Bend County, Clark said.

Before it is adopted, the overall 2045 plan will undergo several review processes by community members, state agencies and H-GAC’s Transportation Policy Council, a policy-making body.

“We’re looking to adopt the plan in its final form not this year but next year [in 2019],” Clark said.
SHARE THIS STORY