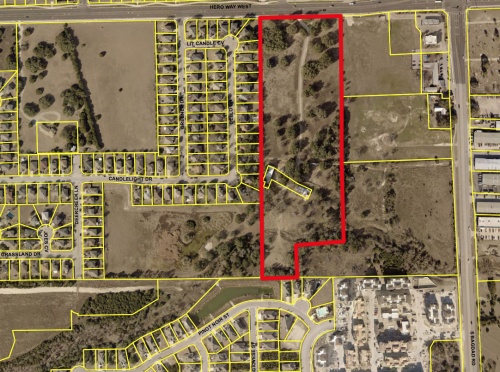 About 15.6 acres near Hero Way West and Bagdad Road was previously zoned as single-family urban. According to city documents, the landowner had requested a rezoning to general commercial, local commercial and neighborhood residential.

After hearing input from local residents, Leander City Council approved a rezoning request Thursday that sought to quell concerns from local neighborhoods regarding a property along Hero Way West.

The property in question, about 15.6 acres near the southwest corner of the intersection at Hero Way West and Bagdad Road, was previously zoned as single-family urban. According to city documents, the landowner had requested a rezoning to general commercial, local commercial and neighborhood residential.

The request was recommended by Leander’s Planning and Zoning Commission with a few modifications during an April 12 meeting, and City Council approved a first reading of the rezoning request with additional modifications April 19.

The rezoning came back before City Council on Thursday for a final reading and approval, and City Council also received a petition against the presented rezoning with around 150 signatures from local property owners. In a previous meeting, speakers raised concerns about possible light pollution, lower property values, crime, loss of green space and lack of proper notice to neighbors.

About seven residents also spoke against the landowner’s requested rezoning before council Thursday. Several asked council members to approve an altered request with local office zoning along the west side of the property that borders nearby homes, general commercial on the east side of the property, to set the building setback at 30 feet and require an 8-foot masonry wall on the west side.

“I do think there is a general consensus among neighbors that I’ve talked to that there is an opportunity to go [local office] along the strip that abuts our houses,” Leander resident Will Hudson said. “That is very much more agreeable to us in terms of the well-being of our families.”