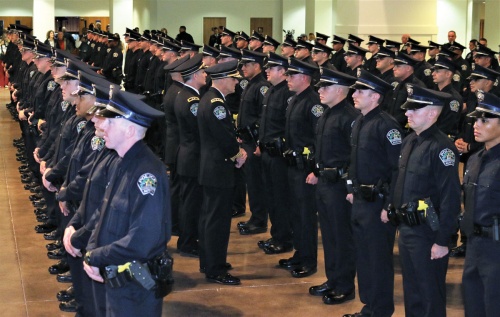 According to multiple reports, the Austin Police Department is understaffed.

In the wake of one the largest public safety threats in the city’s history, Austin City Council on Thursday unanimously committed to funding 12 police department positions it authorized two years ago.

The resolution passed by City Council directed the city manager to work with the Austin Police Department in developing a five-year staffing plan for the force and ensure the 12 positions authorized by council in 2016 will be funded in the next budget cycle. The new positions are for 10 patrol officers, one corporal and one sergeant.

City Council originally authorized 12 new positions sought by APD two years ago but failed to fund the new positions. Since 2013, APD has operated with a significant number of vacancies.

Several times, Mayor Steve Adler referred to the resolution as making a statement to the public that the council stands behind APD. David Roche, president of the Greater Austin Crime Commission, agreed and said the resolution was only symbolic, but an action by which officials can be held accountable.

“That was a victory for public safety, because, unanimously, all the City Council members went on record that they were going to add 12 new officers,” Roche said. “With the events of what’s happened over the last three weeks, I think they are feeling the pressure from the community that they want more officers.”

Roche said this would all come down to the budget discussion this summer and that residents needed to hold City Council accountable for the resolution passed on Thursday.

The other half of the resolution directed the city manager to come back with a five-year staffing plan. District 6 Council Member Jimmy Flannigan said that although some work was already being done on this, Thursday’s City Council action provided clearer and more specific direction.

Although she voted in support of the resolution, District 2 Council Member Delia Garza said the resolution was redundant and that the council needed to provide better leadership in funding the positions sooner, and finalizing a police contract. The police department has been operating without a labor contract since the end of December.