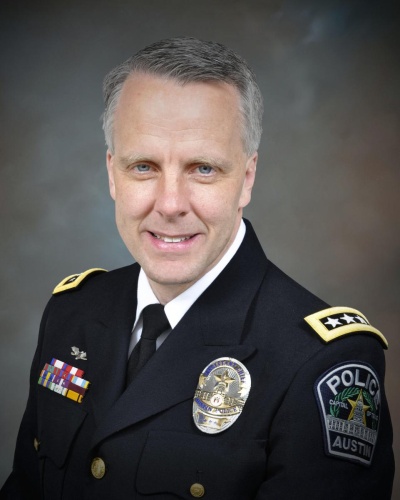 "I've always been a big fan of his," Adler said.

Pool wrote on the council message board that Manley "is eminently qualified and has done a superb job" since taking over as interim chief.

To say all of your colleagues across the Nation are proud of you, @Austin_Police, @ATFHou, @FBI & all who worked courageously & tirelessly, would be understatement. Now let’s remove that interim title & build the Department which is long overdue. Congratulations. https://t.co/fjdwxnWzIA

Manley was named the interim chief of police in November 2016 after Art Acevedo left the department to serve as police chief in Houston.

“While many watched the news safely from home, but on edge, the men and women of law enforcement ran to the bombs and explosions,” Garza wrote on the city council’s official message board.

Manley, an Austin native, started his career as a patrol officer in 1991. He rose through the ranks, and in 2012 was named Acevedo’s assistant chief.

In her message to council, Garza also called for the negotiation and approval of a new contract with the Austin Police Association as quickly as possible. Police have been working without a contract since Dec. 29, and APA negotiator Ron DeLord said recently that discussions a new contract could take months.

Garza said the city has been “slow playing” the negotiation process and inserting unnecessary obstacles.