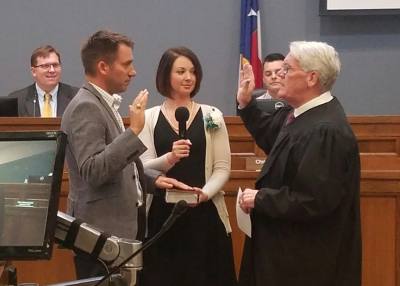 Shane Hines takes the oath to fill the District 1 New Braunfels City Council seat at the Council's regular meeting Feb. 26. On June 4, Hines will host his first citizen forum for the district since taking office.

At its regular meeting on Feb. 26, the New Braunfels City Council administered an oath of office to Shane Hines to fill the District One City Council seat. The district was previously represented by George Green, who is currently seeking office in Comal County.

Here are four more takeaways from the City Council meeting.

City Council approved a partnership with the New Braunfels Industrial Development Corporation (4B Board) to acquire 151.43 acres that will be the future site of a sports complex.

A 2013 bond package allocated $2.5 million to acquire land for a sports complex, and the approval from City Council means the 4B Board will provide up to $650,000 to fill the funding gap for a piece of property located at the southeast corner of Klein Road and FM 1101 that is priced at $3,042,000. The money will be used for the remaining purchase price of the property, as well as necessary closing costs.

As part of the agreement, 25 acres will be donated to the Parks Foundation as the seller’s “legacy contribution” in exchange for naming rights and historical display.

The contract for the purchase of the property was initiated on Feb. 2, and March 14 is the anticipated closing date.

City Council moved to approve the first reading of an ordinance that would increase park fees for some of the city’s most-used facilities.

“That high impact on those locations causes quite a bit of need for maintenance and repair,” said New Braunfels Parks and Recreation Director Stacey Dicke.

If all of the fee increases are approved, they would generate an estimated $310,000 in additional general fund revenue that would be earmarked for improvements at the facilities.

Dicke first presented recommendations for fee adjustments at Landa Park. Currently, more than half of Landa Park rentals come from non-residents, and non-resident fees are 30 percent higher than resident rates.

At Fischer Park, the parks board recommended raising pavilion rentals from $50 to $75, with non-resident fees being either two times or 130 percent greater. This would generate an estimated $20,000 increase in general fund revenue.

Adjusted rates for Landa Haus rentals that would generate an estimated $100,000 in general fund revenue were also recommended. On weekends, resident rates would jump from $350 to $500 per day and from $300 to $400 on weekdays. Two-hour rentals on weekdays would increase from $75 to $100.

Picnic permit fees were also addressed. Dicke recommended raising picnic permits from $10 to $25 per table, noting the fee has not been increased since prior to 2004. Residents would be able to rent their first table at no charge. If approved, the new fee increase would generate an estimated $20,000 in general fund revenue.

City Council will have the final say on how much the fees will increase, which will be decided at a future meeting. Casteel recommended future fee adjustments impact non-residents only.

The City Council approved the first reading of an ordinance that would increase commercial trash rates by 8.5 percent, add another collection vehicle and operator, raise private hauler permit fees from $600 to $2,000 per truck per year and provide operation changes to improve the city’s dumpster enclosure and vehicle access requirements.

If approved, the update would also allow the solid waste department to charge additional fees for requested or required services, such as cleaning containers or the enclosure area of dumpsters due to odor, unsanitary or unsafe conditions.

Mike Mundell, the city’s solid waste manager, said a second reading of the ordinance will be considered March 12, with new fees taking effect April 1 if approved by City Council.


4. Parking by permit area could expand

City Council approved the first reading of an ordinance that would expand a parking by permit zone to include the northwest side of E. Mill Street from N. Market Avenue to 343 E. Mill St. If approved, public notices will be sent in accordance with the ordinance.
SHARE THIS STORY