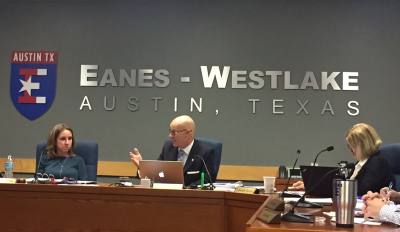 Eanes ISD board of trustee members discuss a possible future bond at their regular meeting Feb. 27, 2018.

An outline for a possible new bond proposal was presented by Eanes ISD Superintendent Tom Leonard Feb. 27 at Tuesday’s regular Board of Trustees meeting.

The goal was not to make any decisions, but to introduce ideas and concepts and to get feedback, Leonard said. He suggested putting together three different committees that would form this fall.

According to Leonard, the "internal staff committee" could provide advice on topics such as facilities, transportation, technology and infrastructure. The "selected staff and community members” group might discuss technology and make recommendations on particular learning or teaching devices and flexible furniture, for example.

The “community groups committee” could be led by one or two community members with staff support, Leonard said.

“These could be short or long term items,” he said. “I don’t want to stifle this group. It would be a visionary type of group.”

Trustees were also encouraged by Leonard to start seriously thinking about other factors: whether a timeline should be set; how big the committees should be; what kind of commitment would be expected from members, and what Trustee involvement in the groups should look like.

The Eanes ISD district cycle has generally been to approach voters about a bond every two to four years, Deputy Superintendent Jeff Arnett told Community Impact Newspaper before the Board meeting.

“The last bond was in 2015,” Arnett said. “We would anticipate the next one to be in the 2019 or 2020 timeframe. There is a lot that goes into planning for a bond issue, from the community engagement phase to determining (types and scopes of) projects.”

The discussion at Tuesday night’s meeting was a very preliminary conversation, Arnett said. He explained the district is always in a cycle. When a bond issue is successful, the focus is on implementation, but the district is also always looking to the future about what might be next. Arnett said starting the bond process again began in a more earnest, serious capacity at Tuesday’s meeting.

Redistricting and when it should be approached in relation to a potential bond was also discussed Feb. 27.

The district's Facilities Enrollment Committee originally planned to start a redistricting conversation in the fall of 2019 for implementation the following school year, according to Leonard.

“We would like to accelerate that timeline to the fall of 2018,” Leonard said. “We don’t want that to be something where administration is sitting in a room drawing boundaries. We want this to be community-led with staff acting as a resource to the community.”

Leonard said it is too early to tell when new boundaries would go into place. He reiterated he was laying this out now for the Board to start thinking over and hoped the evening's discussion would serve as a starting point for the conversation.
SHARE THIS STORY