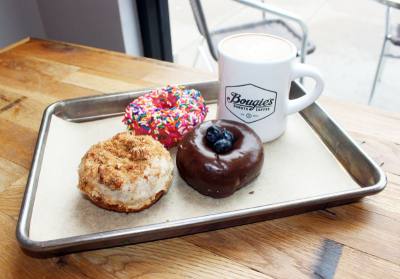 In 2015, the owner of Bougie’s Donuts & Coffee, Ryan Brown, made doughnuts out of doughnut batter after being laid off from his job in corporate wireless sales.

“I was trying to figure out what my next step was, and I really didn’t want to go back into the sales arena,” he said. “When I got home one day the Food Network was on, and they were talking about doughnut robots. At that moment, the wheels were set in motion.”

At first, Brown’s wife, Alisha, chalked the idea up to a pipe dream. But once he returned with a detailed business plan, the couple decided to move forward with the endeavor. In February 2017, Brown opened the gourmet doughnut and coffee shop—its name an homage to “Bougie Boy,” a moniker for the couple’s brindle boxer.

“The tongue-and-cheek aspect of our name is that our donuts are really high-class,” Brown said. “While we don’t look down on anybody, our doughnuts may be looking down from their pedestal on all the other doughnuts out there.”

From the beginning, Brown said he has aimed to elevate the traditional doughnut shop experience by offering products made with high-end ingredients and an atmosphere that is warm and inviting.

“Our mission statement is “Doughnuts, coffee and community,” so we try to view everything through that lens,” he said. “I used to tell people this is not your average donut shop, with three white walls and a pastry case filled with doughnuts begging to get out—a doughnut prison.”

During the week, the Bougie’s crew turns out around 500 doughnuts per day to satisfy both its in-house customers and wholesale partners, Brown said. All doughnuts are developed by a pastry chef and made fresh in the business’s on-site kitchen. Certain items, like the strawberry-sprinkled Homer donut and the blueberry-glazed cake doughnuts are available year-round, while other experimental options, such as the salted caramel mocha, are sold on a rotating basis.

Bougie’s also offers a wide array of Cuvee coffee drinks, including its specialty options the Ladybird Lavender Latte, a nod to Lady Bird Johnson’s love for wildflowers, and a cold or hot Horchata, with the option to go “dirty” by adding a shot of espresso. The Mellow Yellow is the business’s signature non-coffee drink made with ginger, turmeric, honey, vanilla, almond milk and cinnamon.

According to the Smithsonian Institution, several theories exist for why doughnuts are made with a hole in the middle. In one theory, Elizabeth Gregory, a 19th-century ship captain’s mother, would cook donuts for her son’s crew. To mark the doughnuts’ doughy center, Gregory would place walnuts or hazelnuts in the center. Another theory claimed Capt. Gregory himself pierced the center of the donut on the spoke of his ship’s wheel when needing to keep both hands on the wheel.