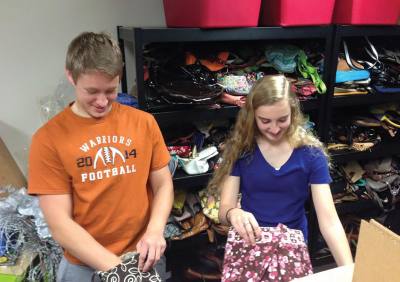 At Handbags for Hope, a campaign by Austin-based nonprofit Texas Advocacy Project, handbags and purses are more significant than a fashion accessory.

For more than a decade, Handbags for Hope co-founder Candace Lambert said her mission has been to make handbags a way to escape from domestic violence situations across Texas.

“Over the years the word has spread,” said Lambert, a domestic violence survivor herself. “First it was just introducing the ideas to [shelters] and getting in a car and driving boxes to the shelters and telling them about it. Now, the shelters across Texas call in to request handbags.”

The campaign is one of several annual events put together by the Texas Advocacy Project to raise awareness about the organization and the problem of domestic violence as well as help victims. The project collects new and gently used handbags, and volunteers place free legal help and safety and economic planning pamphlets inside to distribute to women in domestic violence shelters across the state.

Cedar Park Place 6 Council Member Kristyne Bollier said she first heard about Handbags for Hope from Lambert. Bollier participated in the annual event last year and said she has seen the organization make a positive impact on the community.
“Handbags for Hope has been very positive to [Cedar Park] and sheds light on an often ‘unspoken’ issue of domestic violence, a problem that transcends all social/economic strata and ethnicities,” Bollier said in an email.

Handbags for Hope has collected approximately 39,000 bags since its inception. In 2017 the campaign collected 5,000 handbags that were distributed to 90 different shelters.

T-Werx Coworking, a Cedar Park-based shared office space, was one company contributing to last year’s campaign. Owner and CEO Jeff Kikel said he is proud that T-Werx helped collect 2,500 handbags during the 2017 campaign.

For Kikel the symbolism of using a purse or handbag as a way to help and empower women stood out.
“It something small, but it’s a woman’s power center a lot of times,” Kikel said. “It’s where they put all their stuff, and a lot of times it’s the one thing that’s theirs.”

The 2018 annual Handbags for Hope collection drive kicks off Feb. 20 and runs through April 2. Visit the project’s website to find drop-off locations.

Williamson County judge: It is ‘not the plan’ to return to COVID-19 lockdowns

Williamson County Judge Bill Gravell at a July 20 public meeting said he has no plans to implement restrictions to mitigate the spread of the coronavirus. According to the WCCHD coronavirus dashboard, the rate of new infections across Williamson County doubled from July 11-18.

The proposal also provided details on the capital budget, including the electric bus fleet and bus station improvements.