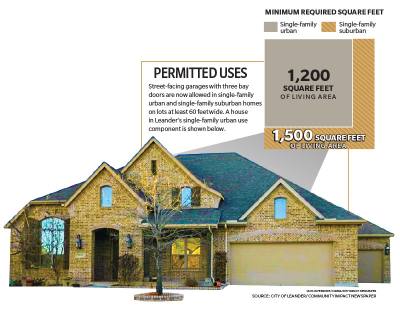 Leander City Council voted in January to alter a regulation that was put in place on its composite zoning ordinance last spring, restricting street-facing garages with three bay doors in certain uses.

In March 2017, City Council approved several amendments to the composite zoning ordinance, which determines land and building uses on a property and which materials can be used in its construction. One of the amendments restricted street-facing garages with three bays in single-family compact, single-family urban and single-family suburban use components.

After the ruling, city staff gave homebuilders a grace period of six months to adjust plans, according to city spokesperson Michael Neu. Several Realtors and representatives with the Home Builders Association of Greater Austin requested the city amend its ordinance, citing a market desire for the garages.

Micah Weldon, Realtor for the Kent Redding Group of Berkshire Hathaway HomeServices Texas Realty, said that three-car garages have been a trend for over 10 years and said she does not expect the trend to change in the near future.

“Sales of this type of product reinforce our position that this product continues to be a popular option for homebuyers,” said David Glenn, Director of Government Affairs for the HBA.

Council Member Shanan Shepherd proposed an amendment to the ordinance that would allow for street-facing garages with three-bay doors in single-family urban and single-family suburban districts on lots 60 feet wide and greater. The ordinance continues to limit the number of bay doors to two in the single-family compact use component.

Leander Planning and Zoning Commission unanimously recommended denial of amending the ordinance.
“There are times when we come to different conclusions [than the commission],” Council Member Michelle Stephenson said. “City Council has the task to take in the bigger picture, including the complaint that people who wanted homes with three street-facing garage bays, on the more affordable 60-foot lots, were having to go outside our city limits to build a home.”

City Council gave a final approval of the amendment during a Jan. 4 meeting at a vote of 6-1, with Council Member Ron Abruzzese voting against.
SHARE THIS STORY