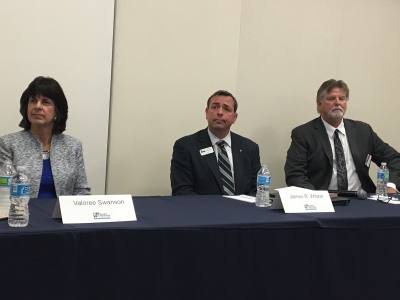 Candidates for State Rep. District 150 attended a forum at the Houston Northwest Chamber of Commerce on Feb. 21.

Houston Northwest Chamber of Commerce invited candidates in the primary race for State House representative, District 126 and District 150, to participate in a question-and-answer session at a Houston Methodist Willowbrook Hospital conference room Feb. 21.

Three Republican candidates for the District 126 seat—Gail Stanart, E. Sam Harless and Kevin Fulton—and Democratic candidate Undrai Fizer participated in the discussion. Natali Hurtado, who was not present at the forum, is also running for the Democratic nomination in the primary.

What legislation do you foresee in the next session as essential in support of business interest?

Kelly: If we only accomplish one single thing … it would be, let’s take care of our education system in the state of Texas. Public education should be the No. 1 thing we take care of. Everything flows from having an educated electorate. We can’t keep pushing this thing off on property taxes.

Wilson: If we don’t have good schools, we won’t have intelligent, capable, intelligent employable people … public school finance [reform] will address a lot of our local property tax issues, but the second thing is workforce and vocational development programs. The state needs to modify its curriculum to allow for more of these types of education programs.

Swanson: I want to let all of you loose to start businesses and have your businesses flourish. It’s small businesses that [drive] our economy. We need all the big businesses, but the small ones are what truly drive the economy and provide the majority of our jobs. I believe we need more vocational training. I believe we need to train people, especially young women in trades … that pay a decent living.

Fizer: If we can develop their mindset and their courage, people will be able to start companies if they believe in themselves. When was the last time you heard of state reps creating initiatives that empower people to really believe in themselves? … I believe we need to devote time to urban affairs. I believe those who are business owners in the area should establish mentorships to help people … know the value of a job.

Fulton: I hear over and over the statistic that the state is lowering how much they are funding education … [but] the percentage per student has gone down because the cost has gone up. The first thing we need to start looking at is: is that money being used efficiently? We have to make sure our government is running efficiently, first. For businesses ... I would like to eliminate the margin or franchise tax.

Stanart: We need to spend less and spend it more efficiently and appropriately. I can add to that that I think we need to be careful about incentivizing businesses to come to Texas when we are taxing our current businesses that are already here. I want to incentivize you guys by lowering your taxes, reducing regulations. I agree on repealing the gross revenues tax, I agree on removing inventory tax … I agree on education, that we have got to incentivize our teachers to stay in our schools.
SHARE THIS STORY