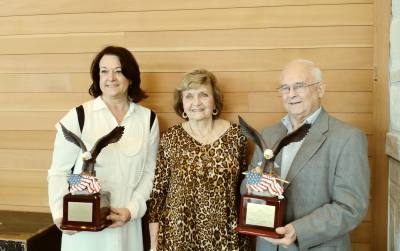 Cathy Zerwas (left), Patsy Stanley (center) and Bill Callegari pose for a photo after the awards presentation. Zerwas accepted the award on her husband's behalf because he was traveling.

Callegari was recognized for his efforts on the city of Katy Drainage Committee, the Katy ISD School Board, his efforts toward healthcare and education as well as his past service as a state representative for District 130, which includes Katy and the surrounding area.

Speaking to the EDC's general assembly at the Cane Island master-planned community, Callegari expressed his appreciation for Stanley’s mentorship, especially in the face of special interest groups during Callegari’s time in the Texas Legislature.

“He was always there to lend a friendly voice,” Callegari said. “When Stan spoke to you, you knew he was sincere.”

Zerwas received the award for his service as an elected official representing the Katy area. He has served as chairman of the House Committee on Higher Education and is on the Committee on Public Health.

The EDC also noted Zerwas’ part in getting approval for bonds to fund the University of Houston's future campus on Grand Circle Boulevard in Katy. Zerwas’ wife, Cynthia, accepted the award on his behalf and expressed her husband’s appreciation for the recognition.

Stanley’s wife, Patsy Stanley, also spoke and predicted that her husband would be proud of both men for their civic service.

“[Stan] had picked some really great people to be on his team and [they] have served well,” she said.
SHARE THIS STORY