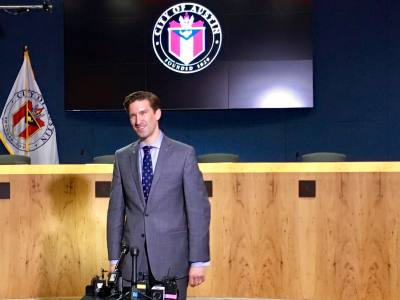 Between CodeNEXT, the police contract and filling several executive vacancies, Austin’s new City Manager Spencer Cronk said he needs time to give the city’s most pressing issues their due diligence.

Less than two weeks into his tenure, Cronk sat down with local media Tuesday to discuss his vision for the city and his early strategies for tackling Austin’s most pressing needs.

The former city coordinator from Minneapolis said was unable to provide many detailed answers, citing his short amount of time in Austin to date. However, Cronk said he looks forward to working with transparency and with respect to unique stakeholder relationships across the city.

Here a few takeaways from the media roundtable:


Asking the same three questions for all stakeholders

Cronk said his biggest challenge is being an outsider. But to learn about Austin’s community, history and best direction for the future, the city manager said he will ask all stakeholders the same three questions:


Finding the gaps in community engagement

When Cronk was vying for the job, he placed an emphasis on the importance of community engagement and listening from Austinites not typically heard. On Feb. 15, Cronk sat in on a city council meeting with hundreds of speakers for the police contract negotiation and paid sick leave ordinance.

“One question I had in my mind was, ‘Who weren’t we hearing from?’ and how do we get to more voices that can come to the table but that might not be able to attend the council meeting,” Cronk said.

Cronk started his new position Feb. 12, the same day that CodeNEXT 3.0 went public. The city’s top executive is largely unfamiliar with the nuances of a land development code rewrite that stands at a critical point and has eaten up almost five years and $8.5 million.

“It’s going to be important for me to take the time that’s need to understand [what the code] looks like, but also the patience and flexibility from the community on knowing that I’m new to this,” Cronk said.

Cronk would not divulge much information on his strategy in the upcoming police contract negotiations but said the goal is to enhance service for Austinites.

“It’s my goal…to ensure that both the [Austin Police Association] and [the Austin Police Department] and the city are meeting the expectations of our community and stakeholders on how we can be a partner and serve our Austin community better,” Cronk said.

There are roughly 13 executive vacancies within the city of Austin’s rank-and-file staff, highlighted by the position of police chief, which has remained vacant since the end of 2016. Cronk said he will build a framework for how he will approach the vacancies, but said filling the positions may not happen within the first six months.
SHARE THIS STORY

WEIGH IN: We want to hear from parents heading into the 2021-22 school year