Pearland, Friendswood emergency services work to keep up with growth 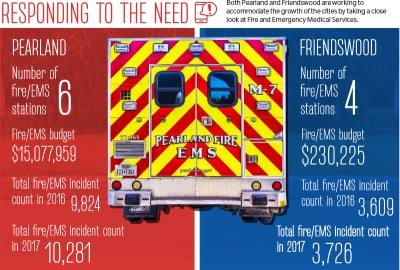 The cities of Pearland and Friendswood have been working to address fire and emergency medical service coverage.

In Pearland, the city is adding stations to keep up with growth and improve response times.

With the city’s attempts to provide fuller coverage to the area, the November annexations of several areas in the city’s extraterritorial jurisdiction might raise questions about the added burden that comes with it.

However, the city has been serving the annexed areas for years. The upside of the annexation for the city is that it will now receive funding for the fire and EMS services from the newly added areas through property taxes. However, the short-term amount is minuscule, City Manager Clay Pearson said.

“In the scheme of operations, it’s helpful but not significant,” Pearson said. “Most of the areas are largely unincorporated so from a near-term perspective—obviously things will generally grow and build out—but near term, it’s not significant for the city.”

In Friendswood, the city is addressing the potential issue of the fire and EMS capital plan deficit. In August, Community Impact Newspaper reported that the department runs a $160,000 annual deficit.

Many plans have been discussed, but council is far from making a decision, Council Member Steve Rockey said.

“One of the things that we have said is, ‘We don’t ever want to discourage volunteers,’” Rockey said.

Community Impact Newspaper last reported the city of Pearland’s struggles with fire and EMS response times, based on a Citygate report that was presented at a City Council meeting in February 2017. The report concluded that the city’s response times could not improve without additional fire stations.

Since then, the city has worked to make both short-term and long-term changes to the response times.

“We’ve added stations and people, and from the growth that is already here over the ground we are doing that rationally and over time and absorbing that,” Pearson said. “We’re building up facilities and adding the people to continue the high level of service that we can provide right now.”

Over time, the city plans to add new stations as well as employees. The city is working on replacing Station 1, which will be located at the northeast corner of McHard Road and Old Alvin Road. Construction is expected to end in June.

The new station will host one four-person engine crew and one two-person ambulance crew, according to the city of Pearland.

Currently, the city is also working on the design phase of fire stations 7 and 8.

Station 7 will be placed northeast of Bailey Road and Veterans Drive, according to the city’s capital improvement plan.

Station 7 will house one four-person engine crew and one two-person EMS ambulance crew, as well as two trainees.

Station 8 will be placed on Shadow Creek Parkway, according to the city’s capital improvement plan.

“We’ve made it efficient with the fire administration that is responsible also for EMS and fire operations and code enforcements,” Pearson said. “They do a lot of prevention work, and so it is a major part of our operation, and we take it very seriously.”

The addition of land from the ETJ near McHard, west of Hwy. 288, and south of Dixie Farm Road will not add to the struggles the city may meet in providing services.

“[The annexation] doesn’t present any more challenges because we have been responding into those newly annexed areas for years,” Pearland Fire Chief Vance Riley said.

However, council will begin to have conversations about ending fire and EMS services in certain areas of the ETJ, said City Manager Clay Pearson.

“One of the things we are going to be looking at very hard with the City Council over 2018 is the balance of the ETJs where we don’t have some kind of agreement … so the city is not subsidizing those and everybody in the city is paying for those very high-level fire services that are projected into the ETJ,” Pearson said.

While the city will begin discussing different options for the ETJ without a fire agreement, the city is far from any decision to pull fire and EMS services out of these areas, Pearson said.

“The city gets very limited revenue from responding into some areas in our ETJ in Brazoria County. Annexing those areas obviously would bring in additional property tax to help toward the cost of providing the fire and EMS service,” Riley said.


Fire and EMS in Friendswood

In July 2017, a study in Friendswood predicted capital expenditure fund would be insufficient in 2019 for the Fire and EMS budget.

As a reaction, the city formed a committee to look over possible changes to be made that could reverse this.

City Council has begun to discuss different options but is far from making a decision, Rockey said.

The city is going through bids for fire and EMS departments which will continue into late spring, Rockey said.

While the city is considering outsourcing as a possibility, the city is far from deciding on that option, Rockey said.

“No one on council is convinced that is what we need to do,” Rockey said.

According to Rockey, his hope is that the city can keep the volunteers, even if the fire and EMS service becomes primarily paid employees.

“I can only tell you that I personally would really hate to see volunteer fire and EMS go away. I would like to do something that keeps the current volunteers and not outsourcing it,” Rockey said. “It’s a very nice feature about Friendswood that we have people volunteer for their fire and EMS.”

As Friendswood has grown, maintaining a fully volunteer fire and EMS department has become more difficult. According to Rockey, the volunteers used to be able to have a day job and volunteer for a few hours at night. Now, the volunteers would get four or five calls a night, discouraging volunteers during the work week, Rockey said.

Friendswood’s fire department demands have remained relatively stable, Rockey said. However, as the population has increased, so have the EMS needs. The average age of the Friendswood resident has also increased from a little under 40 in 2010 to a little over 40 in 2015. EMS calls have increased by nearly 250 calls in the past six years as well, providing a possible correlation.

One of the proposed solutions to combat the insufficiency is charging citizens for ambulance rides. According to Rockey, this solution is more popular among Friendswood citizens than the possibility of raising property taxes to pay for the fire and EMS services.

“So, you know Friendswood people have different opinions about everything. Trust me. But one thing they are pretty consistent on is that they don’t want their property taxes increased,” Rockey said.
SHARE THIS STORY

The importance of accessible parks and green spaces for recreational usage has increased since the COVID-19 pandemic, according to a new study by the University of Houston-Clear Lake.

Locals will be able to watch, play and compete across popular games.