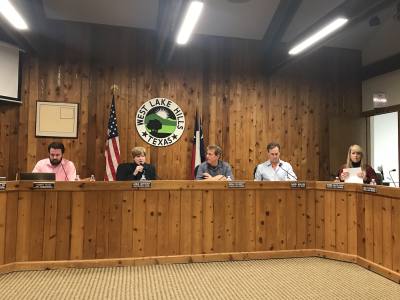 “When I walk along Redbud Trail or any of the little streets [in the city], it’s not a routine thing but I have seen arrows,” Mayor Linda Anthony said. “I’m not walking on someone’s property; I’m walking along the side of the road.”

While firearms can still be carried in the city of West Lake Hills, according to state law, the city’s original ordinance made it illegal for a civilian to discharge a firearm within city limits, Wood said. The amended ordinance prohibits the discharge of a crossbow or a composite bow within the city limits, as well.

“Even a regular arrow, they can go pretty far,” Wood said. “If you fire one up it can land two properties down (if you are not using it safely). It’s not to say someone couldn’t be completely safe. It’s just that when you’re in an area where people are packed in somewhat tightly together, there is the possibility of some kind of safety problem.”

The use of longbows, which are typically less powerful than other bow types and are commonly used for recreational archery target practice, will still be allowed in the city. However, arrows fired from a bow must remain on the shooter’s property, according to the amended ordinance.

The presented ordinance amendment included prohibiting the use of all bows within the city.

Council Member Beth South, who said she has in the past set up targets at her property, was concerned about prohibiting archery all together and convinced council to make the exception for longbows.

“This (recommendation) surprised me when I saw it because bows could simply (be used) on targets,” South said. “We already have a no hunting (ordinance) to take care of (concerns about deer safety), but I have a problem saying you can’t shoot a regular bow on your property.”
SHARE THIS STORY