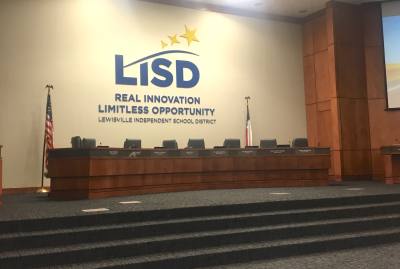 Texas Attorney General Ken Paxton on Wednesday issued cease and desist letters to three Texas school districts, including Lewisville ISD, that he says are conducting "unlawful electioneering," adding one more chapter to an ongoing fight over how involved public education organizations can get in this year’s primary and general elections.

Paxton, a Republican, warned the Brazosport, Holliday and Lewisville districts that they are violating state law by using taxpayer money to distribute messages advocating for specific candidates and policies to their staffs.

“These school districts must understand that they are responsible, as all state agencies are, for refraining from spending public funds on advocating for or opposing political candidates,” Paxton said in a statement Wednesday. “The electioneering of these school districts is unacceptable and a poor example of the civic responsibility, integrity, and honesty that Texas educators should model for our students.”

Paxton’s letters emphasize that while school districts may promote civic engagement and register students to vote, they are not permitted to “use state or local funds or other resources to electioneer for or against any candidate, measure or political party.”


Paxton specifically called out school officials for using public accounts and school dollars to express opinions on particular candidates. Many of the school districts' social media accounts have tweeted or retweeted stances on public education issues in the upcoming elections.

Some of the posts Paxton identified advocate for particular candidates or policies, while others more generally encourage voting in support of public education.

Paxton called out Lewisville ISD for a tweet from the district's account which read, "We are asking for support from our state Legislature. We're not getting it. It's time for change."

In a statement, Lewisville ISD officials said the district "believes a culture of voting is vital to the future of our state and country. The right to freely elect leaders is the very definition of American Freedom and we are asking students and staff to vote and understand what impact a legislator may have on their daily lives. The district respectfully disagrees with the Office of the Attorney General on this matter."

The tweet referenced in the letter was taken down on Feb. 7, one day after it was posted, when school officials said they became aware the intent may have been misinterpreted.


"We dispute any characterization of the district’s get out the vote campaign as anything other than an effort to engage the LISD staff and community in their constitutional right to vote and advocate for themselves," the district said in a statement. "The district will reiterate again with staff that they alone can make the decision to support a candidate and measure, and the district does not wish to impose the beliefs of its board or superintendent."

Construction of the fire training facility is expected to begin this fall.

The GoZone service will launch Sept. 7 with 32 vans operated by agreement through a private company called Via.

A grand opening for Lewisville's new Thrive Nature Park is set for Aug. 28.

The city of Lewisville is poised to call a November bond election to fund a new central police and fire complex.

Widening of I-35E has required partial demolition of the current location for Northern Tool + Equipment.

Nack Development has pledged to invest $5 million to construct a three-story building at Main and Charles streets in Lewisville.