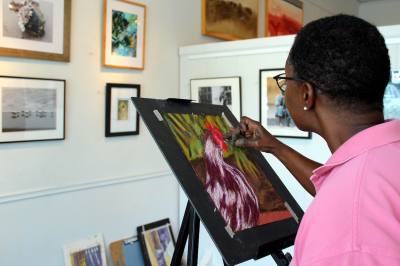 Austin Artspace near Anderson Lane is one of a few places in Austin that offers an artist in residence space.

Should a new office project go through as proposed, the developer hopes it will serve as a crucial variable in the formula to save Austin’s disappearing artists space.

Cielo Property Group has plans to build a five-story, 150,000 square-foot office building at 1600 E. Fourth St. in East Austin. However, if City Council grant the project’s ask for an extra floor—bringing the height to 72 feet—it would allow 9,000 square feet of dedicated artist space to be rented at 50 percent or less of market rate.

The extra floor would provide the revenue necessary to sustain the reduced rental rate, said Bobby Dillard, co-CEO of Cielo Property Group. Dillard said the project would be the first of its kind in Austin. He said he hopes it will serve as a model for how the development community can help in the battle to preserve Austin’s creative identity.

If approved, Dillard will offer the space to the Pump Project, an East Austin-based arts organization that provided studio space to 40 artists for 12 years. Director Josh Green told City Council late last year that rent spiked 50 percent and the group could not afford the rent through 2018.

Added entitlements, such as height, are negotiated between a developer and City Council through the city’s density bonus program. The exchange for entitlements usually includes the addition of affordable housing on the project, or payment to the city’s Affordable Housing Trust Fund. No extra entitlement program for the inclusion of artist space exists yet, so along with the deeply affordable artist space, Dillard plans to offer an additional $850,000 to the trust fund.

“We [will be] taking a financial hit, but that’s OK; there are other things you can look at [for value] besides money,” Dillard told Community Impact Newspaper. “You can call it a leap of faith, or taking a long-minded approach, but we feel like a project is going to be more successful if it incorporates what people value in the community.”

An office building is typically only activated on weekdays between 8 a.m. and 6 p.m., said Dillard. He said the addition of the art space will bring activity at later hours and on the weekends, providing more vibrancy to the community and sustained demand for the building's available space.

However, without the extra floor, Dillard said the artists space becomes harder to sustain. City Council will set the public hearing on the case on Thursday. City documents estimate the project will come back to council for public input March 8.
SHARE THIS STORY

The new pizzeria is planned to open in January 2022.