Some businesses say Bee Cave's permitting process is too slow 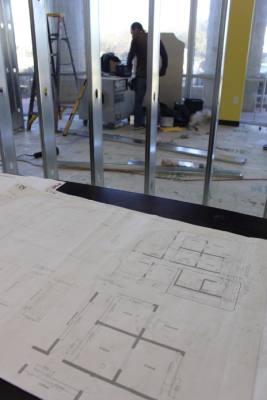 A worker builds out a commercial space in Bee Cave in January 2018.

Small-business owners wanting to open new storefronts or expand in the city of Bee Cave say the city’s permitting and inspection process is slower than expected, costing them money and frustrations in delays.

“It can be a challenge. It feels like we’re being worked against instead of worked with,” said Adam Metcalf, owner of Alive & Well at the new Park at Bee Cave, 3944 S. RM 620, Bldg. F, Bee Cave. “It’s not like they’re having somebody guide us through some of these issues. It’s like they’re trying to put up barriers rather than be helpful with businesses coming in.”

Metcalf told Community Impact Newspaper that in July he attempted to submit a signage package for his business, which will include several businesses under one roof and should open in March. He said city staff told him they would not review the package until he had secured a certificate of occupancy, or CO, a final stage of the city’s permitting process.

“Part of the reason I was trying to submit that sign package was to get some kind of approval to know when it was OK to submit it," he said.

In December, after he secured his CO, he submitted his sign package for himself and two co-tenants located at his business site, each with its own lease and entrance, only to learn he could not put up multiple signs since he had a single CO.

“My response was, ‘Why didn’t you tell me this earlier? I would have been able to fix my build-out at that time and prepare for this.’ Sometimes you have a different interpretation of the ordinance. But it would be nice if we could say, ‘How are we supposed to do this?” he said.

Metcalf met with Bee Cave City Manager Travis Askey over the signage issue, but city staff still advised Metcalf to build walls between each of the business’ individual spaces so he could get the clearances to open.

The Rules are the rules in Bee Cave

Askey told Community Impact Newspaper the city of Bee Cave’s ordinance is clear stating a business owner cannot put up three separate signs in one tenant build-out space. He added the city has made efforts to help Metcalf.

“We have allowed a tremendous amount of flexibility for tenants who want to get in [the Park at Bee Cave development],” he said.

“Water quality, retention ponds and setbacks are a big deal around here. That site is nowhere near complete, yet we have continued in an effort to be business-friendly to work with these folks who want to get open.

"They have spent a tremendous amount of money—but my responsibility is to implement the codes, regulations and council policy,” Askey said, adding while Metcalf built the entire building his business and his partners are moving into, he is still subject to the external rules around the entire site that pertain to access and safety elements, such as roads and lighting.

Director of Planning and Development Lindsey Oskoui said there is typically an opportunity for business owners to meet with city staff to go over the steps to needed pass inspections.

Next-day inspections are the goal

“We [strive to] do next-day inspections. They dictate how frequently we go out [to a site], Oskoui said. "The tradeoff to that: The faster your build, there might be more errors that [end up needing] reinspection.”

Metcalf said when a reinspection was needed, his crew lost days to rescheduling. Some business owners say the entire permit process is taking too long.

In July, Ny Le, who runs Organic Day Spa which first opened six years ago at 14360 Falcon Head Blvd., Bee Cave, applied for a permit for renovations on a new, subleased space in the same plaza in order to accommodate another tenant who had expansion plans.

“[We thought the entire renovation project would take] about two months to complete,” Le said. “We were waiting for the city’s permit, and we didn’t get it [when we expected].”

A series of work permits was granted to Organic Day Spa in September, city records show. Work was completed, and the shop was able to reopen Dec. 31. For the veteran business owner who is leasing Le the space, insurance professional Joe Whorton, a four-to-six-month period for a tenant buildout is too long.

“How do I see this as a business person who has multiple locations [including Lakeway, Austin, Round Rock and Los Angeles]? This has been the most trying of ordeals in a suburban-type city,” he said.

Whorton, who is also building out his own new office space next door, said his contractor was surprised to learn certain elements had to be made more robust midway through the Day Spa project.

“They’d ask us to build it [a certain] way. And then they would and come in and say, out of the blue, ‘You know what? We need to change that.’”

Oskoui said it is not desirable to have inspections done piecemeal. “[But] if there has been a mistake made at plan review and a life safety issue comes up, that is going to take precedence, she said.

“It is the responsibility of the contractor to try and make sure the job is ready to be inspected,” she said, adding the city of Bee Cave adheres to International Building Code standards put out by the International Codes Council and are widely recognized.

Ken Saterlee, CEO at St. Croix Capital Advisors, the group behind the Gateway to Falconhead development, 3500 S. RM 620, Bee Cave, where a number of shops will be opening for business this winter, said keeping up with the number of permit applications is a constant issue for the growing city of Bee Cave.

“City staff at the city of Bee Cave are hardworking, dedicated people. They have incurred a phenomenal uptick in growth in this community, and it is very difficult to be able to process all of that with the size of staff they have," he said. “They would be well-advised to staff up.”

No plan to increase city staff

Oskoui said there is no plan to request new budget funds this or next fiscal year to add to the current roster of full-time department staff. On occasion, the city of Bee Cafe hires outside inspection firms that help cover staff absences or periods of short-term spikes in application submissions.

“If we have a lot of residential projects going, it sometimes affects [the speed of processing] our commercial projects,” Oskoui said. “We’ll sometimes see residential builders submit 10 or 15 [permit] applications at one time. That can bog things down [at the review stage] for a week or two.”

Oskoui said city of Bee Cave staff try to balance waves of applications by interweaving individual applications to keep the wait times fair. She said the city has not had an issue with inspection delays.

Digital permit filing is the norm

The city converted to the web-based portal in 2014 called
www.mygovernmentonline.com because it is used by several regional jurisdictions to track permit applications, and most contractors are familiar with it, Oskoui said. Since its installation, city staff have refined the user interface and the internal workings based on feedback, she said. For example, applicants are required to list the precise project site address, including a suite number, to avoid confusion and delays at sites with multiple projects underway.

“We’re always trying to continuously trying to evaluate our process and learn from feedback what has worked and what hasn’t,” Oskoui said.

Askey admitted the permitting rules can be frustrating to some business owners, but the city’s sales tax revenue tells a different story.

“The fact that we have a 2 cent property tax rate [per $100 valuation] speaks to how business-friendly we are,” he said.

This fiscal year the city plans to capture $6,750,000 in total retail sales tax revenue, making up 78.7 percent of the city budget, records show, up 2.77 percent from the prior year.

“We lean very heavily on economic development and retail,” Askey said. “That’s been our stock and trade for years and years.”