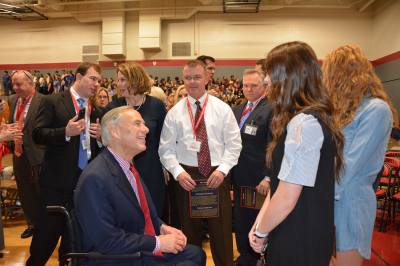 Students at Briarhill Middle School on Wednesday spoke with NASA astronaut Joe Acaba who is living, working and doing research aboard the International Space Station.

Acaba is currently a part of the Expedition 53/54 crew that launched to the International Space Station in September 2017.

"I think the most interesting part about it was the fact that we got to talk to an astronaut and ask him questions that we came up with," eighth grader Lexi said.

Students had been preparing for this downlink by studying the solar system, universe, gravitational effects on plants and animals, plotting space station coordinates, calculating distances to various planets, planning what to pack for a journey to Mars using surface and volume formulas, and using ratios/proportions to paint a life-size version of the International Space Station on their football field. About 1,000 students and teachers were expected to be at Briarhill for the downlink.

BMS was one out of three schools in Texas that was selected to speak with an astronaut.

The budget workshop will be held at 9 a.m. Aug. 7 in the Lewisville Annex Community Room.

Read the latest business and community news from the Dallas-Fort Worth area, including a shop offering authentic Mexican treats and cravings.

Enrollment for the upcoming school year is projected to be 50,014 students, according to discussions.