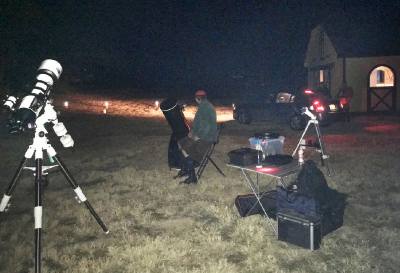 Telescopes were set up to allow eventgoers to look into the night sky. The Westlake neighborhood of River Hills, which was named a Dark Sky Friendly Development of Distinction last August by the International Dark-Sky Association, continued its efforts to promote the night sky and spread awareness about light pollution with an event Jan. 13 featuring a guest speaker and a night sky viewing.

The IDSA works to protect the night sky for the future generations. It certifies Dark Sky Places based on an application process that reviews lighting ordinances, community advocacy and lighting practices.

“The River Hills Neighborhood Association is trying to protect its dark skies,” Secretary Susan Silberman said. “We are the entry to the Hill Country, and if the foothills fall to light pollution then it will advance and march through the Hill Country. We have to take a stand.”

The RHNA and Austin Astronomical Society hosted guest speaker Harun Mehmedinovic, who discussed a series of time-laps films he created to showcase night skies across North America. Called the Skyglow Project, the films also display the impact light pollution can have on the night sky.

Mehmedinovic showed a map of light pollution across the United States. By and large, the night sky in East Coast states is impacted negatively by light pollution, and large Western cities such as Los Angeles and Las Vegas emit light pollution that can be seen from 200 miles away, he said.

“The fact that you can leave Austin and drive only one to two hours to see pristine dark skies is very lucky,” he said. “In some areas of the East Coast you may have to drive 15 to 20 hours.”

Mehmedinovic said the number of communities and federal lands applying to become an official dark sky areas increases each year, and he hopes one day the IDSA will be able to designate an entire state as dark sky-friendly.

“We as people have to do as much as we can in our local communities to curb a lot of that light, because even some of the big federal lands can’t quite [meet dark sky qualifications] because there are too many surrounding towns with bad practices,” he said.

Mehmedinovic said that a major modern contributor to light pollution is LED lights. While LEDs are more energy-efficient, the blue or white light emitted from LEDs hinders the night sky more than previous sodium vapor lights, he said. LEDs impact the night sky from streetlights to lights found in a home, he said.

“Light pollution and its impact on human health is something we didn’t even know was as extensive as it is until [scientists] started doing studies on it over the last 20 years,” Mehmedinovic said. “The human body for thousands of years has been conditioned to spend half its life in darkness, so especially when you’re sleeping you need darkness.”

He said humans produce the hormone melatonin at night, and introducing too much light can limit production, leading to depression, insomnia and other ailments.