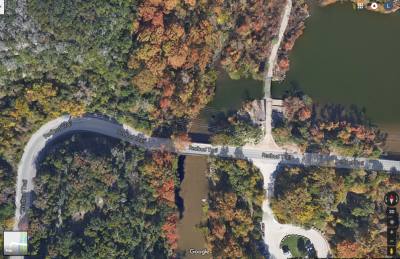 The intersection of Red Bud Trail at Red Bud Isle is among Austin's top crash locations.

The city of Austin requested funding from the Capital Area Metropolitan Planning Organization in January for a $50 million project that would replace the Emmett Shelton Bridge, which brings Redbud Trail over the Colorado River.

The current bridge, which was built in 1948 and last rehabilitated in 1999, is considered insufficient for current vehicular and pedestrian traffic. According to a 2016 traffic study, the bridge is used by more than 16,000 vehicles per day.

The current bridge would also be about 6 inches under water during a 100-year flood event.

The city of Austin also requested the city of West Lake Hills pass a resolution to show support of the project.

West Lake Hills City Council on Jan. 11 decided to submit a letter supporting the effort to replace the bridge instead, which also gave the city a chance to express concerns about the proposed project.

“We all recognize that the bridge needs to be replaced, that it has some serious structural issues, that it could be improved and there are issues with roadway safety,” Mayor Linda Anthony said at the Jan. 11 meeting. “But the designs that have been submitted are really problematic for us.”

The project, which is still in the preliminary engineering phase, does not have a finalized design, Austin Public Works Department spokesperson Carolyn Perez said.

The most recent city of Austin plans, updated Dec. 21, show the proposed bridge would have 12-foot lanes, maintaining the current bridge’s lane width. However, 8-foot shoulders will be added to both sides of the road. A 12-foot walk and bike lane would also be added to the bridge, with a barrier separating pedestrians from vehicle traffic.

The proposed bridge would also be built taller than the current one to protect it from potential Colorado River flooding during a 100-year water event, Perez said. An official bridge height has not been selected, she said.

Key concerns include increased traffic into the city due to the new width of the bridge, and visual impediments caused by the increased height of the bridge, including light pollution, Anthony wrote in the city’s letter to Austin, submitted Jan. 19.

She also wrote that proposed bike lanes would encourage cyclists to enter West Lake Hills and use roads that are narrow and unsafe for pedestrians in areas.

“While it specifies in the design that there will only be two vehicular lanes, with all that extra width what’s to preclude it from being used some point in the future to [add more lanes]?” Anthony asked council Jan. 11. “Redbud Trail and Westlake Drive simply cannot handle a sizable increase in traffic volume.”

Perez said that the new bridge is required to address all mobility needs, including pedestrian, bicycle and motor vehicles as well as provide a dedicated section for utilities. Lighting needs will be determined and designed during the design phase, she said.

If the design and construction phases of the project are funded, design is expected to take approximately two years, with an additional two to three years for bridge construction, Perez said.

Utility crews are moving natural gas lines to prepare the way for a $13.7 million road project under the direction of the Texas Department of Transportation.