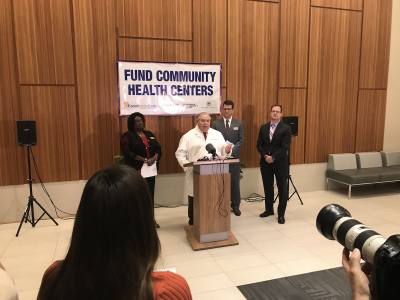 A spending bill passed by Congress Friday and signed by President Trump provides more than $7 billion for community health center funding which extends through Sept. 30, 2019, a press release from Central Health stated Feb. 9.

"Congress has not yet approved discretionary appropriations worth about $1.5 billion for the nation’s community health centers," Jason Fournier, CEO of CommUnity Health Care Centers said in the release. "For CommUnityCare these additional appropriates are worth about $1.6 million. This discretionary funding is currently delayed as part of the annual budget negotiations Congress continues to debate, with action now needed by March 23, 2018."

Central Health held a press conference Tuesday to call U.S. Senators to include funding for the Community Health Center Fund, which provides funding for Federally Qualified Health Centers, or FQHCs, in the federal budget proposal.

The Senate is expected to pass the measure and send it to the House before government funding expires at the end of Thursday, the expiration of the continuing resolution that Congress passed in January, the release stated.

The package would also extend a reauthorization of the Children’s Health Insurance Program, or CHIP, for 10 years, the statement said.

Funding for FQHCs, expired on Oct. 1, 2017, putting centers including CommUnityCare and Lone Star Circle of Care in Travis County at risk of running out of federal funding entirely by the end of March, Jason Fournier, CEO of CommUnity Health Care Centers said.

"I can equivocally say this is probably the most challenging funding period that we've ever faced as health centers," Mike Geeslin, President and CEO of Central Health, said.

A budget proposed by the U.S. House of Representatives on Feb. 6, also included two years of funding for the Community Health Center Fund, Fournier said at the conference.

Last year, CommUnity Health Centers in Travis County served 96,000 patients, with 350,000 visits, Fournier said. If federal funding for the Community Health Fund doesn't make it into a final federal budget agreed upon by the House and the Senate and approved by President Trump, it could result in the loss of up to $4.2 million in funding for Travis County alone, Fournier said.

"Without the work we do here, people will die. People think I'm saying that loosely but I would have died if I didn't have access to that care," Shirley said.

While prioritizing funding for Community Health Centers has been subject to debate within Congress, Geeslin said he is hopeful lawmakers will keep the funding included in a final budget resolution between the House and the Senate.

"We hope strongly that our Congressional members will make the right decision in support of low-resourced individuals and vulnerable populations across the country," Geeslin said.
SHARE THIS STORY