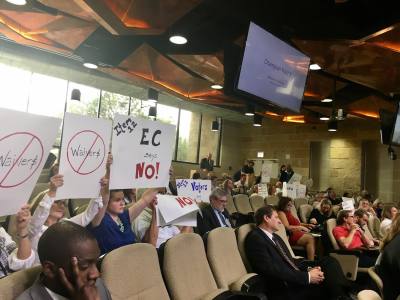 The fate of the controversial 300-unit multifamily development at the corner of RR 2222 and City Park Road was postponed on Thursday after Austin City Council decided it needed more time.

The City Council said it would come back at its next meeting Feb. 15 to make a final decision on a zoning case that, in its current edition, has taken more than a year to straighten out—the tract's zoning has been an issue since 1996. In the balance hangs the construction of a 300-unit multifamily development and the environmental protection of a 45-acre tract in Austin’s Hill Country.

The latest debate over the plot of land—known as the Champion’s Tract—has been a focus among neighbors, developers, City Council members and judges since 2016. The council originally approved the rezoning—from general office to multifamily residential—in November 2016; however, a judge late last year determined the city did not properly post the case to the public, which required a rehearing and revoting on the case.

The landowner, Champion Assets LTD, submitted a zoning change in 2015 to construct a 300-unit multifamily project on the land. In exchange, the developer said he would minimize the amount of concrete laid on the tract and committed to using only 15 acres, conserving the other 30 acres as natural green space. The council agreed to the proposed project’s environmental superiority and approved it.

Immediately following the 2016 decision, the tract was sold to 2222 Cap Texas LLC, who bought the land on the basis that the entitlements approved by the council would remain. However, after the sale, the city was sued and lost because of a posting error when the zoning case was advertised to the public. As a result, the council had to retake the case.

According to staff, the council’s decision in 2016 was best for the environment because the project was condensed and only took up 15 acres. If the 2016 agreement were rejected by City Council, the land’s development rules would revert back to the 1996 settlement agreement.

This scenario is worse than the 2016 agreement, according to commissioners, because the rules surrounding the development in the 1996 agreement predated many environmental policies that have been passed over the last 20 years. The rules of the tract were grandfathered in by the settlement agreement.

The council on Thursday appeared split, but after receiving new information from staff on the tract and the effects of development, the council voted 8-3 to postpone the case to Feb. 15.
SHARE THIS STORY

Free comic books, live music and plenty of food: Your August To-Do list for Round Rock, Pflugerville and Hutto

From fun runs to target practice; live music to outdoor trivia, there is plenty to do for north Austin metro residents.

Williamson County stated judges may require masks in courtrooms at their discretion.

The Round Rock ISD virtual learning transfer deadline has been shifted to Aug. 9 due to demand.

The company is adding 30 new jobs to its office at The Domain.