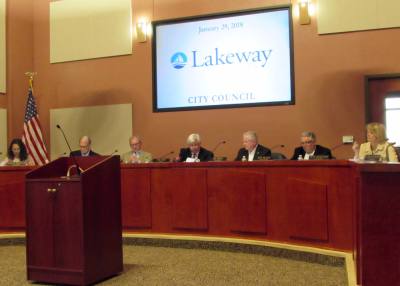 As part of the resolution, the city pledged $5 million to the project, pending voter approval of a future bond, Council Member Ron Massa said at the meeting.

Results of a TxDOT traffic study showed that of the 12 intersections in Lakeway on RM 620, two are currently failing during peak morning traffic, Debba Drive and Cavalier Drive. Six of the intersections studied are projected to fail by 2035. None are projected to have a rating better than a “D” on an A-F scale by 2035.

During peak evening traffic, the Lohmans Crossing Drive intersection is currently failing, and eight are projected to fail by 2018.

City Manager Steve Jones said the proposed improvements include adding two traffic lanes—one in each direction—to RM 620 from W. Hwy. 71 to Lakeway Boulevard. Shoulders will be widened from Lakeway Boulevard to Mansfield Dam, he said.

Bee Cave City Council also passed a resolution to pledge support and $5 million in funding for the project Jan. 23.

Also at the meeting, Jones discussed the city’s comprehensive plan, which outlines the city's future goals and objectives. The current comprehensive plan is 10 years out of date and Jones suggested City Council consider hiring a consultant to perform planned updates.

Although the city could pursue updating the comprehensive plan using city staff and volunteers instead of a consulting firm, Jones said completing the work in that matter could take a long time. City staff is putting together a request for qualifications for consulting firms, he said.

Jones also suggested council appoint residents to a steering committee to help with the selection process and throughout the update process, which could continue through the end of 2018. The steering committee would be made up of two council members, two zoning and planning commission members and three members of the public.
SHARE THIS STORY