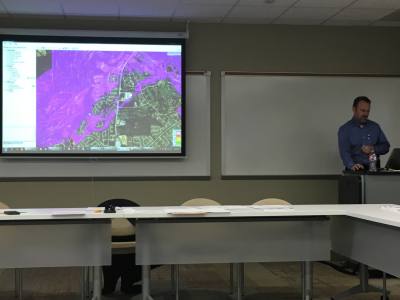 Craig Maske, director of stormwater and GIS services for IDS Engineering, presented animation of flooding during Hurricane Harvey at the Municipal Utility District No. 386 board of directors meeting on Jan. 25.

Following widespread flooding caused by Hurricane Harvey in late August, officials with Municipal Utility District No. 386 are working to find what went wrong and how to correct drainage issues in the area.

During its Jan. 25 meeting, the MUD board of directors met to discuss initial findings from a LiDAR—light detection and ranging—model created by IDS Engineering Group using aerial images to show natural and man-made surface characteristics of a given area.

The model showed a range in elevation for the district as well as animation showing the timeline of the flood, which began Aug. 26 and continued through the next week. Officials with the board hope through understanding why the area flooded, they can begin work on what mitigation can be done to prevent future damage.

“It’s going to take a pretty significant change in the landscape to have a real impact through this area, and so we’re going to start working on that in February and parts of March,” said Chad Abram, senior vice president for IDS Engineering Group. “We need to work through those things before we present anything. Depending on our initial results and the response we get from the [Woodlands Storm Drainage] Task Force will sort of define our path forward, and there is going to be a couple of months of just back and forth iterating before we get a real clear direction.”

The MUD 386 study is just one of several underway in the area—Harris and Montgomery counties, The Woodlands Township and the Army Corps of Engineers are all studying or pursuing funding for studies in the Greater Houston area. Additionally, the National Oceanic and Atmospheric Administration is working to complete a study to examine precipitation frequencies in Texas.

“Atlas 14 estimates are used by engineers and planners for a wide variety of design and planning activities under federal, state and local regulation,” said Maureen O’Leary, a communications staffer with the National Oceanic and Atmospheric Administration, or NOAA, and the National Weather Service. “They are also used to delineate and manage development in flood plains for the National Flood Insurance Program.”

Atlas 14 will update estimates from the 1960s and 1970s using updated technology and additional access to data. The results are expected to be published in September, O’Leary said.

MUD 386 board member Zach Toups said the updated flood plain data from NOAA could mean many more areas would be considered flood plains.

“Atlas 14 is going to have the revised 100-year average rainfall depths,” Toups said during the meeting. “What that means is eventually someone will update the flood plain maps, and the flood plain boundaries … —that none of our houses are in today—will be expanded [because] the boundary will grow. And so I want to let the residents know that there is a potential that while your house is not in a flood plain today, it could be in the flood plain by the expansion of that boundary.”

During the meeting, the MUD board also authorized a contract with engineering group Moffat & Nichol to begin work on a third-party study to examine the areas around Spring Creek and determine the major causes of flooding of homes in the area and if development standards were met by The Woodlands Development Company, Toups said.

The study is expected to take four to five months to complete. A total cost for the study from Moffett & Nichol has not yet been announced, MUD 386 board President Rich Jakovac said.