Work begins to add flyovers between I-35 and US 183, improve congestion on existing ramp 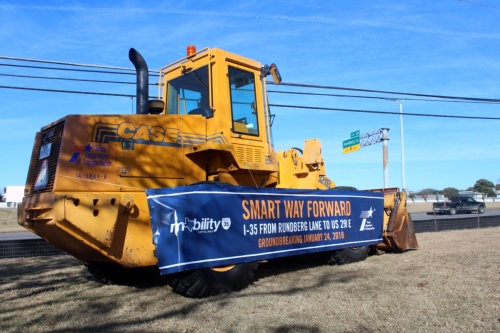 The Texas Department of Transportation is improving connectivity between I-35 and US 183 by adding three new flyovers and fixing an existing ramp that frequently becomes congested.

Area transportation officials celebrated the ground breaking Jan. 24 on the $124.2 million project that will take about three years to complete.

Workers will first begin by demolishing and rebuilding the bridge over I-35 at St. Johns Avenue. The new structure will include U-turns and sidewalks. TxDOT is also adding a bypass lane in each direction that will allow drivers to avoid the St. Johns intersection.

“If you look at [the existing ramp] right now, it always backs up; that’s because the approach to it is kind of steep,” said Kevin Dickey, deputy district engineer for TxDOT’s Austin district. “What we’re going is try to make the approach flatter so it won’t slow vehicles down as they come up to the approach and hit the actual structure itself.”

State Rep. Celia Israel, D-Austin, said every improvement TxDOT does on I-35 has a big impact.

“People will no longer be stuck for two or three [light] cycles at Anderson Lane,” she said. “… These three new flyovers that are connecting I-35 to 183 South create a seamless transition allowing drivers to bypass I-35 through downtown entirely. … It paves the way for a future overall of the entire corridor.”

J. Bruce Bugg Jr., chairman of the Texas Transportation Commission, the governing body for TxDOT, said the project is a key part of TxDOT’s plan for improving I-35 through downtown Austin, funded by the Texas Clear Lanes initiative that targets congestion in the state’s major metropolitan areas using voter-approved funds from propositions 1 and 7.

“Today is a tangible result of what Texas Clear Lanes is all about,” he said.

TxDOT is starting with this piece so that drivers will have another route to avoid I-35 when major I-35 work begins in downtown Austin.

The question at large is what kind of work will happen in this area. Bugg said in March the commission and TxDOT will be discussing available funding from Texas Clear Lanes and options to improve traffic on the highway, including adding lanes.

In October, TxDOT announced it planned to build two tolled lanes in each direction on I-35 from RM 1431 in Round Rock to SH 45 SE near Buda. However, just a few weeks later, the agency reversed its decision after Gov. Greg Abbott state he did not support the use of propositions 1 and 7 funding being used on projects with tolled elements.

The I-35 work at US 183 is the ninth project under TxDOT’s Mobility 35 plan using mostly funding from propositions 1 and 7.
SHARE THIS STORY