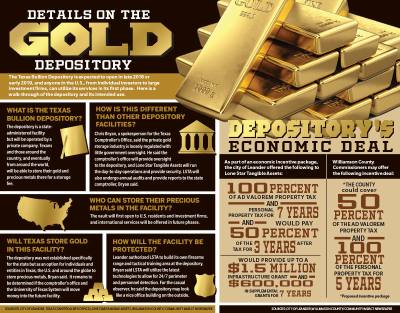 What we reported: In November, Austin-based Lone Star Tangible Assets announced that it would build the nation’s first state-administered gold depository in Leander. The comptroller’s office will have direct oversight of the facility, and LSTA will undergo detailed annual audits of its operations and provide reports to the comptroller, according to the comptroller’s office. The Texas Bullion Depository will allow customers nationwide to store gold and precious metals when it opens, and international services will be offered in future phases. The city of Leander approved an economic incentive deal with LSTA on Nov. 3.

The latest: Williamson County commissioners approved an economic development deal with LSTA Nov. 21. The approval was the last step in the process of bringing the state’s gold depository to Leander. Since then representatives from the Texas Bullion Depository have been meeting with Leander police and fire officials to discuss preliminary public safety issues.

What’s next: According to LSTA, architects are now working on the design of the building. The exact date of the start of construction is still being determined, but it is expected to begin in spring 2018. The storage of precious metals and the administrative functions that go along with that, such as shipping and receiving, counterfeit testing, and processing of deposits and withdrawals, are planned to be made available to the public in the spring from LSTA’s current Austin facility.