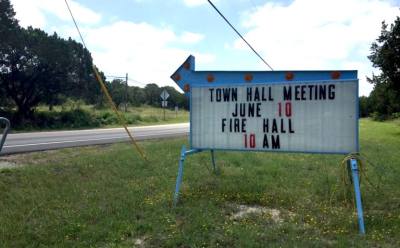 The Village of Volente has held some town meetings at the local fire station due to space restrictions and is considering buying or leasing new City Hall space.

The Village of Volente City Council officially adopted a list of priorities and goals for 2018 at its meeting Jan. 16.

The list of topics includes the village’s comprehensive plan, the Volente Peak Planned Development District, the Brushy Creek Regional Utility Authority, land use ordinances and administrative needs, according to the meeting agenda packet.

Volente’s Planning and Zoning Commission are responsible for updating the village’s comprehensive plan, which “establishes a clear direction as to what do we want Volente to be 10 years from now,” Mayor Ken Beck said.

The comprehensive plan states in section 11 that it should be reviewed and updated thoroughly every five years, although it has not been updated since it was created in 2004, Beck said. He said the plan should address questions such as how much commercial activity will be allowed in the village and where, how to address demand for multi-family or elderly housing and how to handle large-scale development.

To achieve this goal, a committee of citizens, including a council member and zoning commissioner, will be formed to report to the commission. The plan will be updated and feature a “more usable summary” and draw from surveys and town hall meetings to establish consensus on the comprehensive plan, according to meeting documents.

Beck said another village priority is addressing the approximately 300-acre planned development district called Volente Peak. The district was planned to have nearly 300 homes and be served by a Municipal Utility District, but after the economic recession, no work was completed in the district, he said.

The village plans to conduct a legal review of the situation and make a decision on moving forward with or redoing the district’s agreement, according to meeting documents.

The BCRUA is in the process of working on a deep-water intake project, which will pump water from Lake Travis through underground tunnels in Volente to a water treatment plant, providing water to Cedar Park, Leander and Round Rock.

In 2018, the village intends to create an interlocal agreement with the BCRUA, which would specify what both parties want out of the relationship, with the help of an engineer and attorney, according to Beck and village documents.

Additional goals include seeking legal review and opinion on Volente’s rights on eminent domain and forming a committee of citizens to provide feedback to City Council on the BCRUA project. The village also plans on taking action on requests for permits for water wells.

“[The BCRUA] submitted a permit request to drill four water wells in the [right of way] along Lime Creek Road as part of their water table monitoring and management process,” Beck said.

Volente aims to complete a draft of residential building regulations within six months, review the fee schedule and update the builder’s packet in 2018, according to meeting documents.

The village also intends to form a committee of citizens to work on rewriting the site development ordinance. The zoning ordinance re-write has already been completed.

Volente’s current code of ordinances may be found here.

Beck said the current city hall space does not have enough space for City Council meetings, which are held at the Volente Fire Department. Volente City Council has been considering options to lease or own a different property for a city hall; in 2018, the village plans to decide on an official location.

Another administrative goal from village documents is to fill all committee positions by Feb. 1.
SHARE THIS STORY

Jim MacKay was not present at the meeting and his reasons for his resignation have not been disclosed.

For the average Cedar Park homeowner, city property taxes will increase by $115 from the last tax year.

The Block House Creek channelization project is expected to begin construction in fall 2022.

Leander ISD board extends mask requirement through end of 2021

Leander ISD's board of trustees voted Sept. 9 to extend the district's mask requirement to Dec. 31.