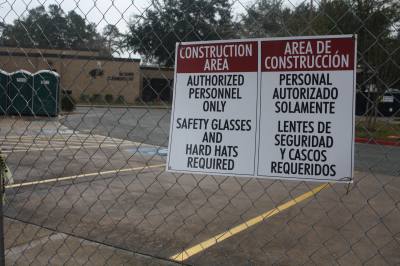 Construction is ongoing at Moore Elementary School in Cy-Fair ISD, which was damaged during Hurricane Harvey.

What we reported Cy-Fair ISD opened Bridgeland High School, Wells and Hoover elementary schools, a replacement campus for Matzke Elementary School and a new natatorium—projects totaling nearly $250 million—in time for the 2017-18 school year. This round of openings completed the district’s $807 million bond package, which was approved in 2007. Administrators planned to move Windfern High School into the old Matzke campus.

The latest Hurricane Harvey flooded Moore Elementary School in late August, resulting in a full renovation set to cost an estimated $12 million to $14 million. Students and staffers moved into the former Matzke facility when school started Sept. 11, delaying plans for Windfern High School by one year.

What’s next The full renovation at Moore is expected to be complete in time for the 2018-19 school year, and officials said most of the cost is covered by insurance. Chief Operations Officer Roy Sprague said once the former Matzke facility is vacant again, work on the Windfern relocation project will commence with plans to open in time for the 2018-19 school year. Sprague said the new facilities funded under the 2014 bond package could include Middle School No. 19, adjacent to Cypress Park High School. PASA will present an updated demographic study around May or June, and those findings will help officials determine where and when the next new schools will be needed, he said.