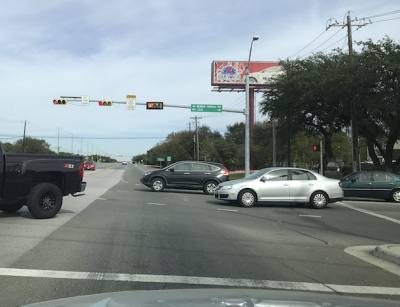 A driver waits at the red light on RM 620 at RM 2222. The Texas Department of Transportation is planning improvements in the coming year to this often congested area.

What we reported: The Texas Department of Transportation is developing multiple projects to improve traffic conditions and safety on RM 620 and RM 2222.

Projects being developed include:

TxDOT updated residents at an open house Oct. 26 on the status of the bypass project, which would allow Steiner Ranch and Lakeway traffic traveling to and from Austin to avoid the intersection at RM 2222 and RM 620.

The latest: Minor updates are being made to the bypass project, including public comments TxDOT received at the Oct. 26 open house, according to TxDOT spokesperson Christopher Bishop. An update will be available early in 2018, and construction on the first phase of the project could begin as early as 2019.

Environmental clearance could be received early this year for the RM 2222 reconstruction project between Bonaventure Drive and Ribelin Ranch Road, he said.

The RM 620 preventive maintenance project was given environmental clearance in September and is scheduled to go out for bid in January, Bishop said.

The RM 2222 project from City Park Road to Loop 360 is still under development and is not expected to go out for bid until February 2020, Bishop said.

What’s next? Work is expected to take place this spring and summer on the RM 620  preventive maintenance project, Bishop said. Work on the RM 2222 reconstruction project could begin this fall and is anticipated to be completed by summer 2020, he said.

TxDOT anticipates receiving environmental clearance for the bypass project by June, with an estimated bid date of September 2020.

The facility is a dedicated hepatology clinic for the Greater Austin region.

JuiceLand coming to Round Rock in November

Round Rock will be gaining its own Juiceland location in November, located in La Frontera Village.