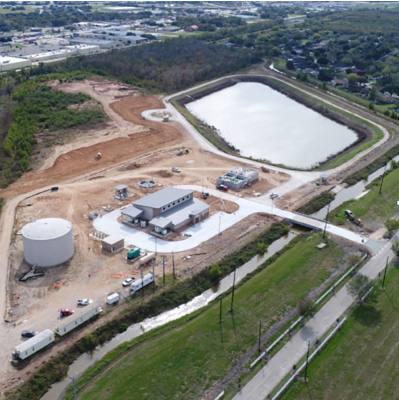 Last March, Community Impact Newspaper announced the city of Richmond’s decision to invest in alternative water sources that resulted in the construction of a new $18 million state-of-the-art water surface treatment plant. The decision to build the plant was in response to the Fort Bend County Subsidence District’s mandate to reduce groundwater consumption by 60 percent by 2025 in an effort to combat subsidence issues in the area. Subsidence is the gradual sinking of land, particularly as a result of pumping water from underground sources.

Construction broke ground on the new plant at 5600 Riverwood Drive in April. Richmond issued bonds in 2015 to cover the cost of the facility, and now residents are in the process of paying those bonds back through a $2.20 surface water treatment fee. The new facility will be capable of producing 2 million gallons per day once it is fully operational.

Startup operations will begin by mid-January, and by the first of February, Christian said he expects to start sending surface water out to residents. Moving forward, the city will explore additional alternative water sourcing methods in a new master plan. Christian said he does not expect the city to increase the surface water fee again for some time.