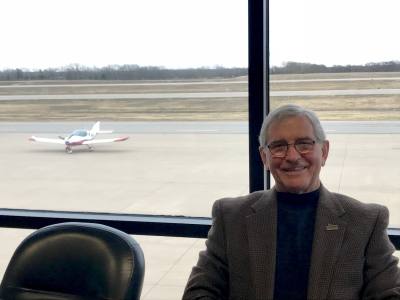 Ken Wiegand served as director of the McKinney National Airport director for 15 years.

From July 2002 to December 2017, Ken Wiegand served as airport director of the McKinney National Airport.

Below Wiegand shared his experience working for the city and what changes he saw during his time as director.

Q: Where did you work previously before working for the city of McKinney?

A: I came to McKinney as a “political refugee" from Richmond, Virginia, where I served two Virginia governors for eight years as director of the Virginia Department of Aviation, which is a political appointment. I came to Texas when the other party’s governor won the election and 87 department heads were replaced. Before Richmond, I was executive director of the Winchester Regional Airport Authority in Virginia, for 10 years. Before that, I had a 20-year military career in the U.S. Army.

Q: What challenges were the airport facing when you began?

A. The airport was just beginning to experience a growth spurt in 2002 after Developer George Schuler attracted Texas Instruments and McKinney Aerospace by providing them with state-of-the-art facilities. George was the airport pioneer and is the guy responsible for putting the airport on the map. His actions spurred a demand for structural and aircraft crash-rescue protection provided by [the McKinney Fire Department] and U.S. Customs service for international arrivals.

The city of McKinney was feuding with the town of Fairview and others over aircraft fly-overs and noise and had its own internal noise issues from residents living closest to the airport.

The North Texas Municipal Water District’s landfill [was also] located about a mile southeast of the intersection of Eldorado Parkway and McDonald Street was within 10,000 feet of the airport’s runway and was attracting large flocks of birds that posed a danger to aircraft in flight. The 10,000-foot proximity caused the Federal Aviation Administration to require the airport to implement a formal Wildlife Program to reduce the risks of bird strikes.

In summary, the city and its business community wanted the airport to grow; residents south and west of the airport wanted it to close.

Q: What changes have you seen at the airport since you began?

A: Let me make it perfectly clear that all of the changes at the airport were accomplished through the efforts of many people including citizen appointees to the Airport Advisory Board and the McKinney Airport Development Corporation who worked with the McKinney Economic Development Corporation, City Council, the city manager, the McKinney Congressional Delegation, Federal Aviation Administration and the Texas Department of Transportation’s Division of Aviation. It was truly a team effort over a period of approximately 11 years.

I began by working alongside an Airport Advisory Board, City Manager Larry Robinson, City Council, the McKinney Economic Development Corporation and the Chamber of Commerce to convince the FAA, TxDOT and the city of McKinney to fund a master plan update to set a course to develop and maintain the airport and a formal federal Airport Noise Study in an attempt to settle the noise controversy.

Both studies were conducted over a period of about three years and coordinated with citizens from McKinney and surrounding jurisdictions through 28 public meetings over the course of the first 18 months or so.

Once they were complete, we took a master plan that called for a new runway, control tower and other improvements totaling about $71 million, to the FAA and our Congressional Delegation in Washington, D.C.

Within six months we had a financial plan drafted and the runway and tower projects were on their way. That plan resulted in: