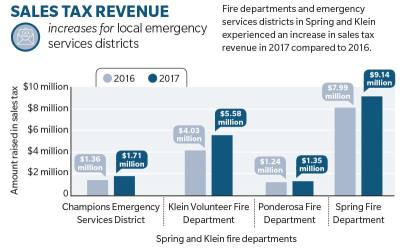 Emergency services districts in Spring and Klein received more revenue from sales tax in 2017 than in 2016, providing funds for capital improvement and other projects.

Each of the four Harris County ESDs which provides fire services in Spring and Klein receives 1 percent of sales tax revenue in certain portions of their coverage areas.

Klein Volunteer Fire Department—which is funded by Harris County ESD No. 16—received $5.58 million in sales tax revenue in 2017—an increase from the $4.03 million the department received in 2016. It is also more than the $3.3 million projected in the department’s 2017 budget, ESD 16 Secretary Steve Falkner said.

“Should the sales tax drop considerably, we would need to slow future capital expenditures,” Falkner said. “However, at least for the next few years, we see sales tax revenue increasing as companies move into the Grand Parkway corridor.”

ESD 16 includes some areas along the Grand Parkway, including the Gleannloch Farms area off Champion Forest Drive where a new $4 million KVFD fire station will open in January.

However, after the flooding in August from Hurricane Harvey, PFD Fire Chief Fred Windisch said he is concerned about how a possible decrease in ESD 28’s revenue from property taxes would affect future sales tax revenue.

“I am concerned about that 500 homes that were flooded [in Hurricane Harvey] and the impact on our ad valorem revenue,” Windisch said. “If that decreases, then we will have to use more sales tax revenue.”
SHARE THIS STORY