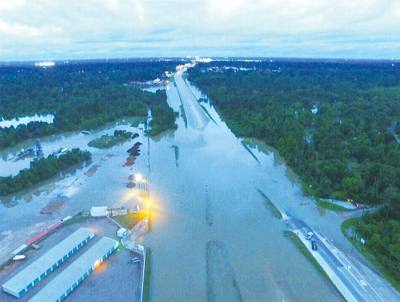 Hwy. 249 at Spring Creek was one of the major corridors that flooded on April 18.

The Harris County Flood Control District was authorized to partner with Montgomery County and apply for grant funding to study flood mitigation projects near the San Jacinto River and Spring Creek at a Harris County Commissioners Court meeting Jan. 9.

Spring Creek and San Jacinto River watersheds and their tributaries will be assessed during the study, which is estimated to cost $1.25 million and begin as early as the second quarter of 2018, said Darren Hess, director of homeland security and emergency management for Montgomery County. The flood mitigation plan will examine and implement projects on tributaries and reservoirs to potentially reduce flooding.

The study must be comprehensive to be approved, according to information on the TWDB website.

"Upstream and or downstream effects of proposed solutions must be considered in the planning," according to the Texas Water Development Board's website. "The proposed planning must be regional in nature by considering the flood protection needs of the entire watershed."

Hurricane Harvey, which dropped trillions of gallons of water on Harris County, has forced the county to think more about mitigation projects along the San Jacinto River and Spring Creek, which serves as the boundary between Harris and Montgomery counties, Emmett said.

"The San Jacinto River and Spring Creek—that whole watershed—because it exists between the two counties, there's no way around it, it has been a little bit neglected," Emmett said. "It hasn't been a major problem except obviously during Harvey when the San Jacinto River Authority decided to open the floodgates of Lake Conroe. And all that water came down in the middle of the night and flooded the people of Kingwood."
SHARE THIS STORY