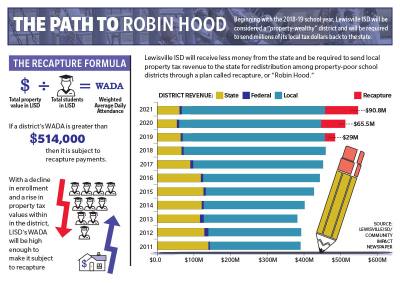 Beginning with the 2018-19 school year, Lewisville ISD will be considered a u201cproperty-wealthyu201d district and will be required to send millions of its local tax dollars back to the state.

Beginning with the 2018-19 school year, Lewisville ISD will be required for the first time to send millions of dollars of its property tax revenue to the state—a process called recapture, or “Robin Hood.”

Recapture is the term for the money the state collects from “property-rich” districts for redistribution to “property-poor” districts.

“This just shows the school finance system is messed up,” Superintendent Kevin Rogers said. “Local taxpayers pay for 70 percent of the expenses of the school district. So they are thinking, ‘When I pay taxes at least it’s going to stay home and benefit the local kids, local staff.’ But now recapture means the school district is going to be sending money down to Austin.”

LISD Chief Financial Officer Mike Ball said the district’s recapture payment requirement was triggered by a rise in property values and a decline in district enrollment.

“The threshold for the first level of recapture payments is reached when the property values per student reaches $514,000,” he said.

Although the district will be sending millions back to the state, Ball said LISD will still be financially strong.

“The sky is not falling,” he said. “We will have to make some fairly minor adjustments to our budget, but not on the magnitude of the recapture
payments.”

The district is planning budget adjustments to compensate for the upcoming recapture payments. One of those adjustments is hiring fewer employees next year, as payroll is the district’s largest expense.

“Historically the district experiences normal turnover of about 430 professional positions each year,” Ball said. “This typical annual turnover provides the opportunity to reduce the number of positions by simply hiring fewer new employees than the number of resignations received.”

Rogers said there are no plans to cut programs or other educational tools in the district due to recapture.

“We will have to tighten our belt and do some things different and be very strategic on what we do expenditure-wise, but we will make it work,” he said. “But we are sure not happy that we are going to be sending millions of dollars back to Austin.”

The district has lost more than 700 students so far in the 2017-18 school year—more than triple the projection of a 200-student year-over-year decline in a demographic report compiled by Templeton Demographics.

Bob Templeton, owner of Templeton Demographics, said he believes the large gap is due to an unexpected number of students leaving the district to go to charter schools.

Templeton said an aging housing market and a change in birth rates are also contributing to the decline.

“The district is seeing a lot of neighborhoods that are aging out,” he said. “A lot of these neighborhoods had lots of school-aged children five to 10 years ago. Now we are seeing less children, and it’s partially a function of the housing cost. The price of housing has gone up so much in the last 10 years that it has priced out some neighborhoods to where they are not as affordable for younger families. So we are seeing older families and families without kids, such as empty nesters, buying these homes.”

Templeton said the change in birth rates is also proving troublesome for the district’s enrollment.

“We are seeing less and less of millennials forming households and having children compared to previous generations,” he said. The district’s kindergarten classes are the lowest it has been in the last five to seven years.”

Last year the district had 3,374 students enrolled in kindergarten compared to 3,292 this year, according to Templeton.

“What’s crazy is Lewisville is building over 1,000 homes a year,” he said. “In any other district 1,000 homes would generate 400-500 kids, but the difference is LISD has a huge gap in class size between the 12th-grade class and kindergarten class, which mitigates any growth from new housing. The 12th-grade class in LISD has 4,179 students, and they only have 3,292 kindergartners—that’s a difference of almost 900 kids. So when that large class leaves, that’s an enrollment drop in the district.”

Templeton said he expects the birth rate to increase in about three years, but it still will not be strong enough to compensate for the large exiting classes.

LISD Board President Angie Cox said it is important for the district and the board to understand why students are leaving the district for charter schools.

“The important topic is, ‘Why? Why are we losing these students?’ and that’s an answer that the district doesn’t really know,” she said. “We ask, but a lot of times people don’t say why they leave the district. So that’s a big component to this.”

Cox said trustees are working to understand why students are leaving and if it is because of a certain program or another opportunity that the district is not offering.

“I’m not saying the district is not being proactive, but I think we could be more proactive in heading off problems if there are any,” she said.

Cox said she believes communication is the key to addressing any problems that parents may have that would cause to them to leave.

“I think a lot of times parents get frustrated and don’t communicate or don’t address the problem, and we don’t have an opportunity to fix it; they just leave,” she said.

Additionally Cox said she wants the district to promote itself more.

“Especially to corporations and businesses that are moving here,” she said. “They can help promote by saying to their employees, ‘We want to bring you here to Texas, and this is a great school district.’ [With me] being in real estate, [my experience says] school districts are one of the most sought-after reasons people move to a certain area. If we can get that message out about all the wonderful things we are doing in the district, I think it makes us
stronger.”