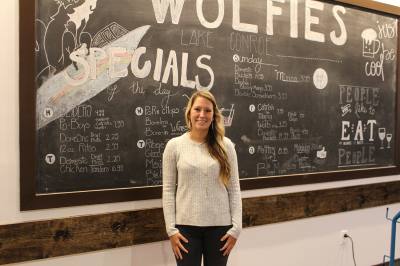 Wolfies on Lake Conroe was one of many businesses affected by Hurricane Harvey in late August, with Wolfies Manager Kayla Spears estimating $350,000 in damage.

Since Wolfies is located lakeside, Spears said staff expected the restaurant to take in some water, with employees placing chairs on tables prior to Harvey’s arrival.

When Spears returned to Wolfies after the storm, she was shocked to see that Wolfies took in roughly 4 feet of water on the lower level.

The lakeside business took Harvey as an opportunity to upgrade the facility by installing a granite bar top, new floors, furniture and repainting the interior. The sports bar’s food and drink menu remains the same, Spears said.

Wolfies’ outside tiki bar is still undergoing construction and has not been reopened, Spears said. “We’re really thankful that we have loyal customers and a lot of regulars,” she said. “We want everyone to know that this is going to be a fresh start for us, and we’re super excited [to be open again].”
SHARE THIS STORY