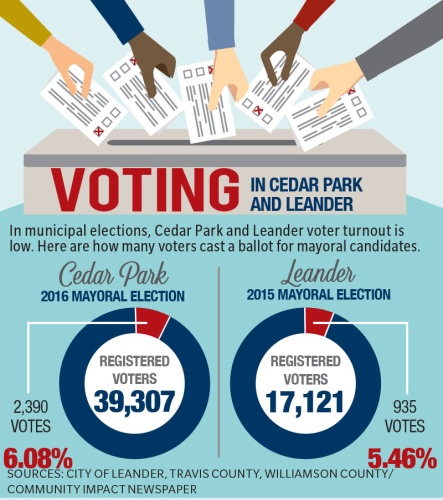 In 2018, eight City Council positions between Leander and Cedar Park as well as numerous county and state positions will be up for election.

Both cities will elect a mayor and three city council members in May, according to the cities’ websites. While the election may be far from the minds of many residents, those interested in running will start preparing now. Candidate filing takes place Jan. 17-Feb. 16, Leander spokesperson Michael Neu and Cedar Park City Secretary LeAnn Quinn said.

Any resident who lived in the cities for a year and meets other basic qualifications may file to run.

Grimes began his time in public office as a member of his homeowners association board when he first moved to Cedar Park in 2012. While in that role, Grimes said he became involved with city staff while working on sidewalk improvements and other HOA issues.

“That got me more intrigued on getting involved on a city level,” he said.

He filled out an application to serve on the city’s Economic Development Sales Tax Corporation Type A Board, or 4A Board, and when a board member seat became available, he was selected to serve by Cedar Park City Council.

As his involvement in city government grew, Grimes ran to serve on the council. City council members and board members are not paid positions. While holding a seat, he said he worked approximately 10 to 15 hours a week in the role.

“Some people were involved in the community on a local charity level, giving to their food bank or giving to their chamber of commerce,” Grimes said. “I feel called to give locally to civic duty.”

Leander City Council Member Shanan Shepherd’s journey to the council resembled that of Grimes; she began her time in city government as a member of the city’s Charter Review Commission and Economic Development Committee.

“My heartfelt, strongest advice is to get involved at some level before you decide to jump in as a council member,” Shepherd said. “You really need to have an understanding of the big picture and the goals of the city if you’re going to do a good job.”

She said when candidates decide to file to run for Leander City Council, they must pick up a packet from the city secretary, which provides them with all the paperwork, laws and deadlines for their campaign.

To run for Leander mayor or City Council, a candidate must be a U.S. citizen, a registered Leander voter, 21 years of age or older, hold no delinquent debts to the city and be a resident of the city or an area annexed by the city for a year, according to Leander’s city ordinance. Also, city employees are prohibited from running, and candidates cannot file for more than one office in an election held on the same date, according to the ordinance.

Cedar Park allows candidates as young as 18 years old who must be a registered Cedar Park voter and a U.S. citizen. They also must have lived in Cedar Park city limits or an area annexed into the city for at least 12 months prior to election day, Quinn said. If city staffers choose to run for election, they cannot continue in their position after filing. Both cities require a filing fee of $50 or a petition in lieu of the filing fee, according to city documents.

Leander and Cedar Park City Council members are nonpartisan, according to Leander’s code of ordinances and Cedar Park spokesperson Jennie Huerta; as such, they do not need to file with party chairs while running for office.

However, when running for office in Williamson County, candidates must file with their party chairman or chairwoman, county spokesperson Connie Watson said. The terms of 14 Williamson County officials, commissioners and justices will expire in 2018, according to county documents.

After serving on appointed boards in the city and county level, state Rep. Tony Dale, R-Cedar Park, said he chose to run for public office because he could “contribute positively as an elected leader,” who has to stand for the voters. He was a Cedar Park City Council member before his current position.

“I believe in the political philosophy of civic virtue whereby citizens not only have rights but also have a duty to put a portion of their private lives and self-interest aside to serve the country,” Dale said. “The preservation of our republic depends on the willingness of citizens to actively participate.”


THE CHALLENGES OF PUBLIC OFFICE

With two school-age daughters, Dale said balancing his responsibilities as state representative with family obligations can be a struggle. The position is a “huge time commitment,” approximately 30 hours a week out of session and over 40 hours a week while in legislative session, which he juggles while running his own business.

“You have to be sort of in the right kind of personal circumstance to be able to serve,” he said.

Dale said he does not often see people who have an employer—rather than being self-employed—hold positions as state representatives because of the intense amount of time required, which can extend to weekends during the legislative session.

Grimes said one of the challenges he faced while running for office and while serving was voter apathy.

“[Citizens] focus more on maybe national issues, things that are in the headlines, and not necessarily things that affect them on a daily basis,” he said.

This is illustrated in voter turnout data for national elections versus elections on the local level. During the presidential election in November 2016, voter turnout in Williamson County hit 67.1 percent, according to Williamson County election results. Compared to the May 2016 election—when Leander, Cedar Park and other five other cities considered council member and/or mayoral candidates—this turnout was massive. By contrast, only 4.8 percent of voters participated in the May 2016 election, according to Williamson County election results.

During that race, a total of 2,390 votes were cast for Cedar Park mayoral candidates in Williamson and Travis counties, according to county records. Cedar Park had 39,307 registered voters in 2016, said Williamson County Voter Registration Supervisor Julie Seippel, so 6.08 percent of Cedar Park residents voted in the election for mayor.

The city of Leander last elected a mayor in May 2015. According to Williamson County and Travis County records, a total of 935 voters submitted a ballot for one of the two candidates for mayor. City and county data shows 17,121 Leander residents were registered to vote in 2015, making the percentage of Leander residents who participated in the mayoral election 5.46 percent.

“You shouldn’t ignore what happens locally,” Dale said. “The impact your local and state officials have on you is much greater than what happens on a national level. Your city council members or your school board members probably have a greater impact on your daily life than what happens up there [in Washington, D.C.].”


OTHER WAYS TO GET INVOLVED

When it comes time to hit the polls, voter apathy is not always the only signal that local political participation may be lacking.

In May 2016, Cedar Park Mayor Matt Powell ran against a write-in candidate, and one city council member in both Leander and Cedar Park ran unopposed.

“Running for office isn’t for everybody, and there are different ways you can exercise your rights and duties as a citizen,” Dale said. “It’s a challenging endeavor and that can dissuade some people from running.”

Perhaps the simplest way of all for residents to influence their city politics is to register to vote.

“It’s important for people to show up at the polls for each election,” said Jenifer Favreau, deputy elections administrator for Williamson County. “Each job has a different function; there are more roles that are important, not just the president.”

Favreau said she gets younger people involved in the election process as student clerk poll workers. High school students age 16 or older can serve as election clerks, which the Texas Education Code calls an acceptable excused absence from school, according to Williamson County documents. Election clerks—both student and otherwise—are paid positions that work at polling locations, checking in voters and assisting them when needed.

“Typically, when a voter signs up to vote, there is a box to check that says ‘I’m interested in being an election [worker],’” said Kay Proud, polling place and recruiting coordinator for Williamson County.

Boards and commissions are another way for citizens to become involved in local government. In Leander, for instance, the city has a library board, a parks and recreation advisory board and a planning and zoning commission, among other committees.

“Serving on a board or commission is an opportunity to help guide a particular organization or cause,” Shepherd said.
Residents may also serve on the Leander ISD board of trustees, which is made up of elected officials and governs policy decisions for the school district.

“The board approves the strategic plan of the district and works to support the vision and goals of the district by allocating resources and monitoring progress,” said LISD trustee Grace Barber-Jordan. “The board reviews student achievement results to drive decision-making and works with the superintendent and district administrators to set goals, evaluate student progress and ensure funding to implement the district’s strategic plans.”

If a resident were to choose to run for office, Grimes said he recommends speaking to those who have served in the past.
“Count the costs—both time, energy, effort and financial,” he said.
SHARE THIS STORY