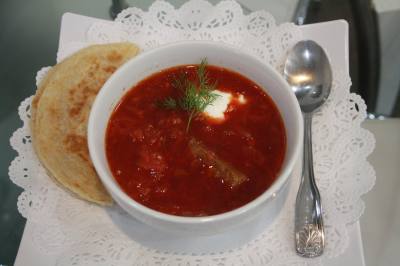 Ukrainian borscht is on the menu at Nyam Nyam Cafe in Cypress.

Made with cabbage, beets, carrots, prime rib and a dash of sour cream, the Ukrainian Borscht at Nyam Nyam Cafe is both healthy and hearty. The soup is served in a 34-ounce bowl for $10.99.

Owner Mikhail Goryachev, who runs the cafe with his wife Nataliya, said borscht is also a good way to battle colds.

“The beets open up your arteries, and that helps with blood flow,” he said. “If you’re sick, it’s the best thing.”

Nataliya said each family has its own recipe, and every recipe varies in terms of the spices and the type of meat used. She said the recipe she uses at Nyam Nyam was passed down to her from her mother.

In parts of Russia and Eastern Europe, borscht is a standard meal that is also served at a variety of functions, including weddings.

“There’s a type of borscht out there for everyone,” she said.

The Black-owned business offers products for all hair and skin types.