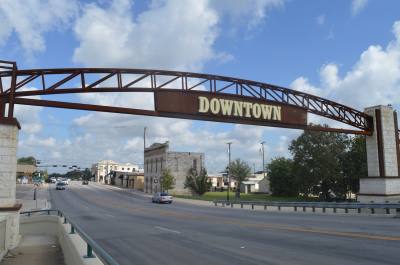 Round Rock isn't ready to call a city bond election yet, Mayor Craig Morgan said at a specially-called city council workshop Wednesday morning, but that doesn't mean the city is going to wait to start discussing the merits of potential projects.

The purpose of Wednesday's meeting was to give direction to city staff on a number of looming topics including the future of downtown safety improvements, space planning for space-cramped departments and a number of projects that would reinforce Round Rock's brand of being the Sports Capital of Texas.

Council and staff gave Transportation Director Gary Hudder the go ahead on removing the center median parking configuration on Main Street from Mays Street to Sheppard Street because of its potential as a safety hazard.

The group that gathered also debated the merits of giving a facelift to the area with new forms of lighting and "tactical parklets," which would take the place of some existing parking spaces downtown to offer additional seating options. Hudder said he planned to continue exploring what all could be done for the budgeted $1 million to make the downtown stretch more walkable.

The meeting also featured a discussion about the merits of two proposed sports complex projects that have tried to negotiate deals to build in the city. One deal - a 50-court tennis facility taking up 30 acres - asks for the city of Round Rock to donate land proximate to the future site of Kalahari, according to a city presentation.

Assistant City Manager Brooks Bennett said the tennis organization making the deal would own, operate and maintain the facility once the land donation was complete.

"The really enticing part from staff is that [the tennis organization] would be responsible," Bennett said.

City staff said the developer seeking the deal currently operates a number of tennis tournaments throughout the United States, including the Texas Junior Grand Slam.

This "turn key facility," as Bennett called it, differs from the other proposed deal that would ask the city of Round Rock to construct a two rink ice hockey facility for an estimated cost of $16 million. The hockey partner would then lease the structure for a 30-year time span.

Council and staff were less enthused about this idea, saying it would likely come to the area, but would not be the best deal for the city of Round Rock to take.

Alternatively, staff proposed a few other ideas that might add value to the sporty brand of Round Rock — converting baseball fields to artificial turf to extend the time available for use; sand volleyball courts; a second sports center; and a second multipurpose complex.

The end of the meeting's agenda featured a brainstorming discussion on potential bond projects for the future. Morgan clarified that the city was in no way immediately preparing to call a bond or taking concrete steps to list out projects, but just discussing the idea for the future.

Morgan said staff should be prepared to discuss the items further at a planned February council retreat.

Items that City Manager Laurie Hadley referred to as "hard core needs" come from a variety of departments including:


Hadley said the projects discussed reflected items on the city's list that could not be funded within the budget.

"We don't have a particular year in mind [to call the bond]," Hadley said. "These are some needs we can't get to under current funding sources."

Some items discussed require more urgency than others.

Fire Chief Robert Isbell said he projected Round Rock would be pressed for fire fighting resources in the coming future.

"In five years, we will probably be in a pretty significant need," he said. "It all depends on how fast development continues."

Isbell clarified new stations would have to be in working availability in five years to address the growing need.  General Services Director Chad McDowell said funding would need to be available in two years in order to give his department enough time to have two stations up and running at the end of five.

The projects on Round Rock's list of potential bond items presented at Wednesday's meeting total more than $260 million.

Round Rock ISD is also in the midst of discussions regarding a future bond package. Trustees began discussing the need for a trimmed down bond package focused on "critical needs" at a Dec. 5 meeting. RRISD trustees plan to further discuss the matter at their scheduled Dec. 21 meeting.
SHARE THIS STORY