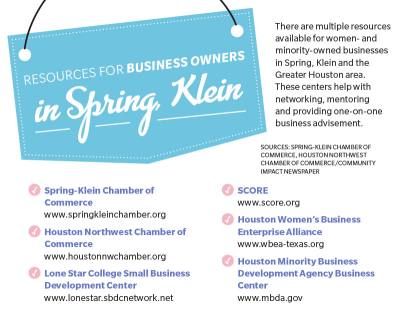 Diversity among business owners has increased significantly throughout Spring and Klein over the past decade, as more minority- and women-owned businesses open in the area. From 2007 to 2016, the number of women-owned businesses in the Greater Houston area increased 70.4 percent, while employment from these businesses grew 34.5 percent, according to the 2016 State of Women-Owned Businesses Report commissioned by American Express.

The cultural diversity and resources accessible to small businesses in the Greater Houston area have helped minority- and women-owned businesses prosper in Spring and Klein, said Barbara Thomason, president of the Houston Northwest Chamber of Commerce.

“I think we are conditioned as a city—not only physically but in terms of resources—to help small businesses be successful, and that’s where the job growth is,” Thomason said.

The area is also favorable for minority-owned businesses, according to a 2016 study by the U.S. Census Bureau. The study found 30.8 percent of businesses in the Greater Houston area were owned by minorities, which was the sixth-highest out of all U.S. metropolitan areas.

Myeshi Briley, president of the Spring-Klein Chamber of Commerce, said high percentages of women and minority-owned businesses reflect what she sees locally at the chamber.

“People feel comfortable when they see others and they are living amongst others to say, ‘OK, maybe I’m going to open up a business here,’” Briley said. “We welcome diversity because it adds value. [It means] you have a lot of ways of doing different things, not just one set way, which is important.”

After Dr. Derrick Mitchell graduated from Johns Hopkins University in Baltimore, Maryland, and completed his residency at Johns Hopkins Hospital in 2005, he moved to Houston to work in the medical field.

After spending some time working at hospitals and a free-standing emergency room, Mitchell—and another doctor, Christopher Visser—opened Medella Urgent Care in Vintage Park in 2016.

A minority business owner, Mitchell said he credits an environment at the state and local levels that supports small businesses.

Business owner Eileen Collins said she found the numerous resources for small business owners in the Greater Houston area to be helpful.

After working in the insurance industry for more than 20 years, Collins opened her own business—Eileen Collins Insurance Agency—in January.

“I felt limited—only being able to offer one company’s products,” Collins said. “I found myself having to turn people away. I wanted to position myself where I could help more people.”

Before opening her agency earlier this year, Collins attended a seminar at the University of Houston about owning a small business. She also joined the Spring-Klein Chamber of Commerce immediately after opening her agency, which she said has helped her network with other members of the community.

Along with community resources, mentorship can be beneficial to minority and women business owners, said Nancy Blackwell, co-owner and president of AEI Engineering. Blackwell took a job at the company in 1996 solely because the company was owned by a woman—which was uncommon for engineering firms at the time, Blackwell said.

She said the owner remained an influential mentor throughout Blackwell’s career, which culminated in Blackwell taking over as co-owner and president of AEI Engineering about 10 years ago.

“I hadn’t given much thought to what I could do with an engineering career, so seeing a really strong woman who had a really successful career in the engineering field—which is not traditionally an area that women go into— kind of opened my eyes to interesting possibilities and opportunities for long-term career development,” Blackwell said.

Among the resources in the Greater Houston area is the Houston Minority Business Development Agency Business Center. The center is part of the U.S. Department of Commerce and is funded by a grant through the Houston Community College System, Director Chris Bilton said.

Bilton said the center works to help minority-owned firms reach their full potential by offering business consulting services and helping connect business owners with the right contacts. For example, Bilton said many of the center’s 82 clients are construction firms. The center helps these firms land contracts by working on their pitches and then connecting them with the person making the decision for that contract.

Bilton said he believes agencies that specifically work with minority-owned businesses are important because it levels the playing field with larger companies and provides more people with an opportunity to succeed.

“People often say, ‘Houston is the land of opportunity.’ You can come to Houston and start a business from scratch fairly easily,” Bilton said. “It’s a pull-yourself-up-by-your-bootstraps kind of town.”

Another resource for business owners in Spring and Klein is the Lone Star College Small Business Development Center. The center provides consultations and holds workshops and seminars for small businesses, both new and old. The center also advises startup business owners who are working on a business plan, SBDC Executive Director Miguel Lopez said.

The center’s main office is at LSC-University Park on Hwy. 249, but the center employs four full-time advisors who work at other campuses in the Lone Star College System, Lopez said.

“We want the small-business community to know that you’re not out there alone,” Day said. “There are organizations here to support you, and there are small businesses that are going where you’re going and have been where you want to go.”

Along with the resources in the area, Collins and Mitchell both said speaking with other people in their field who have started their own businesses was extremely beneficial for them.

Briley said she believes Spring and Klein’s high percentage of women- and minority-owned businesses is indicative of the diversity of the area’s population. According to the U.S. Census Bureau, 50 percent of Harris County’s population was female and 37 percent was of a minority race, in 2015.

Thomason said she believes the success of minority-owned business in Spring and Klein can also be attributed to the area’s proximity to the George Bush Intercontinental Airport and the Port of Houston.

Mitchell said he was unaware of the area’s cultural diversity before he arrived, while Collins said she has not encountered any challenges because of her race or gender while running her agency.

“Being a minority female—the majority of my clients are white—and I don’t think that they are or aren’t picking me to do business with because I’m black,” Collins said. “They like my work ethic and who I am as a person.”
SHARE THIS STORY