TxDOT goes big with $8.1 billion I-35 plan; official says reconstruction 'will be messy' 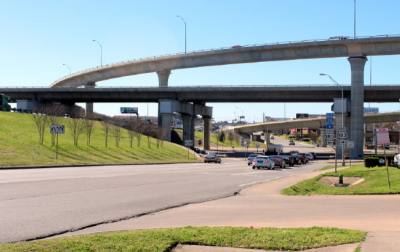 Improvements on I-35 near US 183 will begin in January.

An $8.1 billion plan to improve traffic congestion on I-35 throughout Hays, Travis and Williamson counties could have big results for Central Texans—but not without major headaches during years of construction.

On Oct. 30 the Texas Department of Transportation unveiled its updated Mobility35 plan for Central Texas to add two additional lanes that could be tolled in each direction between Round Rock and Buda, depress the main lanes through downtown Austin, make other improvements and keep the existing number of nontolled lanes.

“It will be messy, particularly downtown when we reconstruct I-35,” said Terry McCoy, Austin district engineer for TxDOT and a Georgetown resident. “We’ll do the best we can in phasing that, but there will still be some impact on the traveling public.”

Planning for I-35 improvements in Central Texas began in 2011 after the Texas Legislature earmarked $300 million to improve mobility in the state’s most congested corridors. Central Texas received about $31 million of these Rider 42 funds. TxDOT released its implementation plans in 2014-15.

“Once we know how much money we have to work with, we’ll start talking about how we start putting the building blocks together,” McCoy said.

If the new lanes on I-35 were to be tolled, TxDOT would face challenges in funding those lanes because funding from propositions 1 and 7 cannot be used to build tolled facilities.

Additionally, in a Nov. 16 letter to the chairman of the Texas Transportation Commission—the governing board for TxDOT, Lt. Gov. Dan Patrick stated he opposes TxDOT’s plans to add toll lanes on 15 projects in the Unified Transportation Plan, the agency’s 10-year plan for construction, development and planning activities.

Austin Mayor Steve Adler laid out three options he sees for funding improvements. The first is for the Texas Legislature to fund more infrastructure in the next session. The second is to allow for public-private partnerships to leverage dollars. The third option would be for state lawmakers to step out of the way and let local jurisdictions figure out funding.

“It’s a state and national project,” he said. “Everybody in all levels needs to participate.”

Construction of four additional lanes, if funded, would not begin until early 2021 at the earliest when several other key regional projects are completed, McCoy said. This is to give travelers more options to get around Central Texas and provide reprieve from construction.

The Central Texas Regional Mobility Authority—which builds and oversees some area toll facilities—will complete its US 183 South toll project in 2020. That $743 million project is adding three tolled lanes in each direction on US 183 between Hwy. 290 and SH 71.

The agency is also planning to build three flyover ramps between Hwy. 290 and SH 130. That project will go out for construction bids in February. And TxDOT plans to seek construction bids in December for its project to add a third lane in each direction on SH 130 between SH 45 N and SH 71.

TxDOT is still working out how to fit in four new lanes, but McCoy said in areas with the least amount of right of way, TxDOT likely would have to build two levels below ground—one level for the new lanes and one for the main lanes—to have the frontage roads and cross streets remain at surface level.

“Given the magnitude of the cost you kind of have to focus where you’re going to make those improvements first, where you’re going to get the biggest bang for your buck,” he said. “If you look at where the greatest congestion is, it is in [downtown] Austin. … That’s what we’re trying to address in the shortest time frame. But we’re not giving up on Williamson or Hays counties.”

Round Rock Transportation Director Gary Hudder said he is eager to see how the project turns out, given the result of the MoPac managed lanes.

“I think any opportunity that we can come up with as a region to better move traffic and better manage traffic is always welcome,” Hudder said.

He said these toll lanes will offer a choice for drivers that will not require every car to spend money on tolls.

TxDOT is working with Capital Metro on incorporating transit in any new lanes. Capital Metro, Austin’s transit agency, is studying transit on I-35 as part of its regional high-capacity transit plan called Project Connect. Todd Hemingson, Capital Metro’s vice president of strategic planning and development, said the agency’s original plan was to build bus stations in line with proposed toll lanes, but that likely would not happen because four new lanes would take all the right of way.

“This announcement will lead us to rethink the role of this corridor in the broader scheme of things and create a need to take a more in-depth look at alternatives for all-day frequent service with multiple connections to other routes,” Hemingson said.

He said ideally any Park & Rides would need to be at least 6 miles from someone’s destination, likely downtown Austin, for people to choose to take transit over driving.

Although Capital Metro is continuing conversations on what type of high-capacity bus service would work on I-35, Hemingson said it is essential to offer it.

Hudder said the proposal’s biggest benefit will be offering a more direct route for Round Rock’s transit system. In 2017, Round Rock initiated the first year of a transit pilot program that offers Capital Metro routes from downtown Round Rock to downtown Austin.

“If you are willing to take the bus and desire a quick commute, [managed lanes are] a big benefit,” Hudder said.

Impact on the public

Some local drivers have focused on the idea that additional toll roads in the area might cost those commuting more.

“We the people should not have to pay more than what we already pay in taxes for a toll road on I-35,” she said.

Hudder said this project could go on for a decade or more because of associated expenses. He said there are components that are high in price and some on the lower end of the budget.

“[TxDOT] is going to continue to go through and bite off parts of the overall plan in smaller bites and smaller pieces as they manage the funding,” he said.