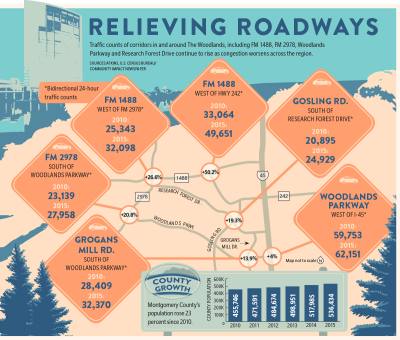 Government officials throughout south Montgomery County are planning tens of millions of dollars worth of mobility projects across the region over the next few years.

Since voters approved a $280 million road bond referendum in November 2015, a variety of projects have progressed throughout Montgomery County and are either under construction or nearing completion.

Montgomery County Judge Craig Doyal said he believes high-priority projects, such as the expansions of Rayford Road and FM 2978, will ease congestion for residents and make a difference for future travel times upon completion.

Doyal said while the county’s population has already     increased by 23 percent since 2010 to 560,000 residents, the number of residents is expected to keep increasing, spurring the need for mobility improvements in the area.

“We’re just at the tip of the iceberg with [transportation projects],” Doyal said. “There’s a huge need for mobility countywide, and we’re supposed to double our population in the next 10-20 years. You can tell by the congestion that the county is continuing to grow. ”

Montgomery County precincts 2 and 3—which cover The Woodlands, Oak Ridge North and Shenandoah—have several projects that are near completion, under construction or still in the engineering and design phase.

Precinct 2, which received $64 million in total from the $280 million bond package, has already completed half of its $8 million Research Forest Drive expansion.

Don Dean, Montgomery County Precinct 2 operations manager, said the project will add two lanes in each direction from Alden Bridge Drive to Egypt Lane. The section between Egypt Lane and FM 2978 has already been completed. Construction on the remaining portion of the project is slated for completion in the first quarter of 2018.

Dean said another major project for Precinct 2 is the widening of FM 2978 from FM 1488 to Conroe-Hufsmith Road—including a new bridge over Dry Creek. The entire project will reach completion in 2020.

Precinct 2 Commissioner Charlie Riley said the project has been in the works for nearly three years and will have a significant effect in relieving congestion in the FM 2978 and FM 1488 corridors.

The corridors have seen a rise congestion in part due to new residential and commercial properties in the area, including multifamily living complexes.

New complexes that have developed since 2016 include The Grand Estates in the Forest and The Mansions in The Woodlands on FM 1488. New residential communities include Del Webb The Woodlands, which opened in April 2016 on FM 1488 and  Northgrove at Spring Creek, a new 600-acre master planned community  on FM 2978.

According to a 2015 report compiled for The Woodlands Area Economic Development Partnership by Atkins , an engineering consultant, 24-hour traffic counts for FM 1488 west of FM 2978 increased 26 percent from 2010 to 2015 as a result of new development.

“There is nothing that points to traffic slowing down in the [future],” Riley said. “The FM 2978 and FM 1488 corridors are some of our busiest corridors, and nothing indicates that it is going to slow down in that area.”

Construction has also begun on one of Precinct 3’s biggest projects: the $60 million Rayford Road expansion.

Matt Beasley, Precinct 3 chief of staff, said the project will widen Rayford Road from four to six lanes between Lazy Lane and the Grand Parkway while adding a six-lane bridge over the railroad tracks. The project started in April and is on track to be completed in mid-2019, he said.

“Rayford Road is still progressing,” Beasley said. “We are installing infrastructure for drainage and constructing the overpass at the railroad tracks.”

County officials said they believe the project will greatly improve east-to-west traffic flow and safety along the Rayford Road corridor, which has seen a development boom in the past year due to new businesses and residences near the Grand Parkway area.

Birnham Woods Marketplace, located at the northeast corner of the Grand Parkway and Riley Fuzzel Road in Spring, is a major development the area has seen, with new stores such as a Kroger Marketplace, Sprint and Dentalopolis opening this year.

The population growth within a 3-mile radius of the intersection at the Grand Parkway and Birnham Woods Drive has been exponential since 2000, when 11,968 residents occupied the area, according to data by Capital Retail Properties. As of 2015, there were 46,863 residents living in the area. With the addition new of subdivisions in the area, such as Woodson’s Reserve and Harmony, that number is expected to rise.

Jacqie Wilson, Rayford Road project team spokesperson, said the road currently handles more vehicle traffic than it was originally designed for., Wilson said the project will allow for safer travel for residents and businesses in the area.

“Once improvements are implemented, Rayford Road will be able to accommodate future traffic volumes more efficiently and safely,” Wilson said. “Residents will also be able to access their subdivisions easier, and commercial businesses will have improved access as well, considering the addition of signals and signal synchronization.”

Powers said the township will continue to work with precincts 2 and 3 to provide input on mobility improvement projects and suggestions to reduce traffic congestion for residents in The Woodlands.

“We estimate the current day-time population to be around 250,000,” he said. “Alleviating congestion is a critical issue for the community and the township is committed to working with all the local, regional and state transportation authorities to find solutions to the issue.”

Road bond projects are expected to cover most areas of south county, including Oak Ridge North and Shenandoah, where population numbers have grown by 7 and 9 percent from 2010 to 2015, respectively.

Beasley said Precinct 3 is working with the city of Oak Ridge North to fund a portion of a project that will convert the Woodlands Parkway-Robinson Road interchange at I-45 to a diamond interchange, which is a road junction in which a freeway crosses a minor road. This junction has two traffic signals, one on each side of the freeway.

County officials said the project is expected to increase mobility at the Woodlands Parkway and I-45 intersection. The major interesction has a 24-hour traffic count of 62,151 in 2015, higher than any other road or intersection in The Woodlands, according to the Atkins report.

The interchange will also include reconstruction on the Patsy Road and Robinson Road intersection, along with signalization upgrade.

Beasley said the Texas Department of Transportation recently signed an advancement funding agreement that allows Precinct 3 officials to begin the design phase of the project.

City Manager Vicky Rudy said Oak Ridge North officials were included in design discussions with county officials and requested a design that would allow access to the southeast corner of Robinson Road to ensure any development there would be accessible to and from The Woodlands and I-45.

“We expect the overpass reconstruction to improve traffic through Oak Ridge North to a degree,” Rudy said. “However, we anticipate the greatest impact will be on access to the feeder roads of I-45. The project should reduce the backup of traffic on the overpass as drivers enter the feeder system to enter and exit I-45.”

Rudy said the additional project at the intersection of Pasty and Robinson roads will expedite right turns, and the upgraded signalization will help with the flow of traffic.

Another mobility project on the east side of I-45 is the David Memorial Drive extension in Shenandoah. The $2 million project, funded by the Shenandoah Municipal Development District, is a joint venture between the city and Precinct 4. It will extend the road from Shenandoah Park Drive to Hwy. 242, providing an alternative thoroughfare to I-45.

The project will also connect new Shenandoah developments—Centro and MetroPark Square—already under construction.

Interim City Administrator Kathie Reyer said Phase 1 of the project was completed in late May, and the design for Phase 2 of the project, which is in an unincorporated area of the county, is near completion. It is not yet known when construction will begin on Phase 2, Reyer said.
SHARE THIS STORY