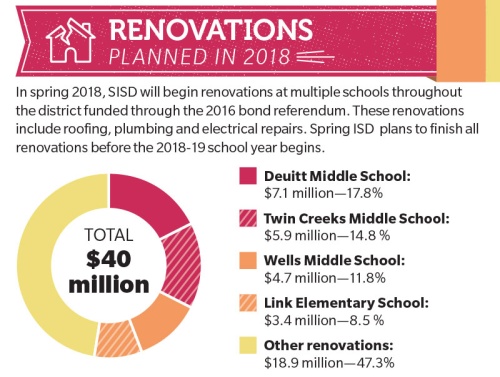 Lemm Elementary sustained about 6-8 inches of water during the late August floods and is set to reopen in August 2018, said Robert Robertson, KISD associate superintendent of facility and school services.

The school lost a significant amount of instructional material and sustained damage to its walls, floor and furniture, he said.

In addition to repairing flood damage, KISD will upgrade the interior of the 35-year-old elementary school next year.

Robertson said the district’s budget for the project is $10 million, although he said he did not yet know how much will come from KISD’s $498.1 million bond package—approved by voters in 2015—and how much will be supplied by insurance.

“It’s going to be difficult to tell,” Robertson said. “One of the biggest questions we are going to have is, ‘How much are we going to spend on bringing the building up to current building code?’”

Robertson said the district is working with architects to develop blueprints for the repairs and renovations. He said work will begin in January or February.

In the meantime, Lemm Elementary School students are attending class at Klein Cain High School, which opened in August. Only ninth- and 10th-graders are enrolled in the high school in its first year, leaving plenty of space for the elementary school students.

Robertson said in addition to reopening Lemm Elementary School next fall, KISD has plans for two other projects funded by the 2015 bond referendum.

KISD will open the $60 million Intermediate School No. 10 on West Rayford Road, in fall 2018 and begin construction of the $26 million Elementary School No. 33 in spring 2018.

Spring ISD will also open multiple facilities over the next few years, funded by a $330 million bond package approved by voters in 2016.

SISD plans to open a new facility to house its police department and tax office in summer 2018. The facility, located on Lockhaven Drive, is a former insurance office building acquired by the district in June for $2.6 million. The new location will increase the size of the SISD Police Department offices from 8,000 to 15,000 square feet, SISD Chief Operations Officer Mark Miranda said.

SISD also plans to open Middle School No. 8, a new building to house Roberson Middle School and a new sports stadium in 2019. The two middle schools will cost a combined $80 million and the new stadium will cost $38 million.