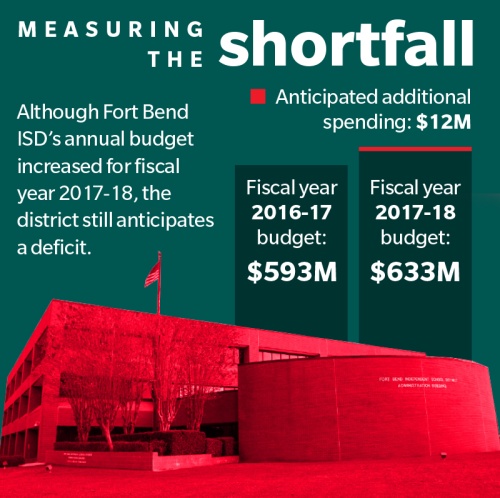 The Fort Bend ISD board of trustees addressed the nearly $12 million deficit adopted into the fiscal year 2017-18 budget in June during an October board meeting.

FBISD Budget Director Bryan Guinn presented a multistep plan for coming up with solutions to close the budget gap, which stems from legislative inaction, in time for the presentation of the FY 2018-19 budget next summer.

“Unfortunately, we do not live in a static world, and as a result of that, we have had some unforeseen items that came our way during this process,” Guinn said.

When FBISD officials adopted the FY 2017-18 budget in June, the plan was to use the designated fund balance from economic stabilization funds to cover the shortfall, Guinn said.

A tax rate swap was also approved by the board in September, providing tax relief to taxpayers and increasing recurring revenues in the general fund from state and local property taxes, Guinn said.

“We are currently engaged in an organizationwide effort to generate ideas to close the budget gap for [FY] 2018-19,” he said.

A top concern for the board is addressing necessary mold remediation at Willowridge High School. The district is tapping 2014 bond contingency funds to cover these repairs, Guinn said.

Additionally, Hurricane Harvey’s aftermath left 66 facilities damaged districtwide after the final budget was approved, Guinn said. Juan Seguin Elementary School sustained the most damage and has yet to reopen, he said.

“We are in the process of working with our insurance company as well as we have had initial conversations with [Federal Emergency Management Agency],” Guinn said. “I will say that the FEMA reimbursement process can take several years. It’s not something that we’ll receive next week.”

In the meantime, the district will have to use money from the general fund balance, Guinn said.

“Until we receive those reimbursements from FEMA, we would be relying on our own funds to do that,” he said.

As a result of some focus groups, ideas have been generated that would help close the FY 2017-18 budget gap immediately, Guinn said. Although district officials cannot quantify the costs associated with these ideas yet, some general thoughts include conserving energy, reallocating teachers between campuses, evaluating free and reduced cost lunch efforts and eliminating unnecessary vacant positions.

“The first objective that we have in mind is to have an organizational wide effort that is methodical to close the budget gap,” he said. “We don’t want to take any kneejerk reactions to just immediately begin stopping spending.”

Idea prioritization will take place throughout December, and, starting in January, ideas will be presented to the community for feedback. Implementation of approved ideas is slated for March or April, Guinn said.

“As much as we would like to say nothing is going to change from this point forward, there will likely be events that happen between now and the next budget year where we have to make unforeseen adjustments to our budget,” Guinn said.
SHARE THIS STORY