How much has been raised for Harvey relief — and how's it being spent? 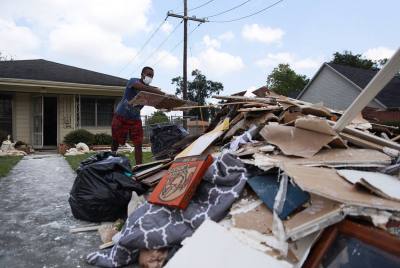 Myles Broussard tosses pieces of drywall into a pile of trash and storm debris outside his home in Beaumont, Texas on Sept. 4, 2017.

Editor's note: This is the Tribune's second scorecard on Hurricane Harvey relief money. You can find the October scorecard here.

Three months after the Category 4 storm slammed into the Texas gulf coast and set off unprecedented flooding in southeastern parts of the state, the tab for Hurricane Harvey recovery is still growing.

Texas leaders have estimated it will take up to $121 billion in federal money to rebuild public infrastructure and housing. It’s a huge sum that even state officials acknowledge they won’t get.

State officials don’t have an overall estimate of the storm’s damage to private property. But more than 18,000 families were still living in FEMA-paid hotel rooms as of Nov. 13 and federal inspectors have visited more than 570,000 homes damaged by Harvey.

While Texans are still waiting to see how large portions of public funds and charitable contributions will be spent, money has begun flowing to recovery efforts.

Here’s a review of what has — and hasn’t — been spent so far.

The two biggest pots of federal disaster recovery money come from the Federal Emergency Management Agency and the U.S. Department of Housing and Urban Development.

So far, FEMA has spent about $1.4 billion on helping Harvey victims with emergency short-term needs like shelter, food, and medical care. The vast majority of the money has gone to housing-related expenses like help paying rent and limited home repairs:

Two weeks ago, the U.S. Department of Housing and Urban Development announced Texas would receive just over $5 billion for long-term rebuilding efforts. None of that money — intended to fill in the gaps after individuals or government agencies have exhausted all other sources of funds — has arrived in state coffers yet.

The federal housing department is expected to announce parameters for spending those funds next month.

The Small Business Administration’s disaster relief loan program (which is available for businesses and individuals), the U.S. Department of Agriculture’s food assistance program, and the Department of Labor’s unemployment program also provide aid during disasters.

So far, the SBA has approved $2.4 billion in low-interest loans to homeowners and renters in Texas. The Texas Health and Human Services Commission has administered more than $295 million in USDA food assistance. As of Nov. 25, the Texas Workforce Commission has distributed another $9.4 million in federal disaster unemployment benefits.

None of the totals includes the 90 percent federal reimbursement that state and local officials expect to eventually receive for disaster-related costs, such as debris removal, incurred during and after the storm.

Earlier this month, after Gov. Greg Abbott called President Donald Trump’s request for $44 billion in aid for recovery from Harvey and other recent hurricanes “completely inadequate," the White House fired back, saying Texas had yet to tap its own funds for Harvey recovery.

“Up until this point, Texas has not put any state dollars into this process,” White House Press Secretary Sarah Huckabee Sanders told reporters. “We feel strongly that they should step up and play a role and work with the federal government in this process."

Abbott’s office disputed that statement, saying the state has already either spent or incurred over $1 billion in Harvey-related expenses. A large portion of those funds could be eligible for federal reimbursement. A spokeswoman for the governor, Ciara Matthews, said the state did not yet know whether the federal government would cover any of the expenses.

The $1 billion total includes an estimated $436 million in disaster-related costs incurred by state agencies, Matthews said, and a projected $400 million funding boost for public schools whose attendance rates decreased because of Harvey.

On Nov. 9, Abbott announced an additional $90 million from state coffers would be available for local governments to help offset costs of debris removal. The Texas Commission on Environmental Quality will administer the money, which comes from an account devoted to solid waste disposal fees.

The nonprofit, which partners with local governments to provide disaster assistance, has spent more than half of the $429 million in donations it received for Hurricane Harvey relief, according to spokeswoman Bristel Minsker. That includes providing $400 stipends to more than 570,000 households, plus an estimated $45 million on shelter, food, and health services.

The organization has budgeted an additional $108.5 million, Minsker said in an email, to help “the hardest-hit communities rebound and prepare for future disasters.”

A ProPublica investigation shortly after Hurricane Harvey hit questioned the Red Cross’s role in disaster relief and uncovered records of local officials in several counties complaining that the organization did not provide promised support or help. Since then, the nonprofit has encountered more criticism of its post-Harvey response, including from Abbott.

In the aftermath of Hurricane Harvey, the Houston Texans player smashed an initial fundraising goal of $200,000 to raise a total of $37 million. On Oct. 26, Watt announced he would donate the bulk of that money to four separate charities — AmeriCares, Feeding America, Save the Children, and SBP, an organization aimed at rebuilding homes after natural disasters — over the next two years. Watt said he would reserve about $7 million of the money to distribute in 2018 “as we continue to assess and analyze the evolving relief efforts.”

Spearheaded by the Michael and Susan Dell and OneStar Foundations, this nonprofit has raised $86.7 million for Hurricane Harvey recovery. As of Oct. 9, it had awarded about $2.1 million for recovery projects proposed by 16 different organizations working in southeast Texas. That includes $75,000 for iConnect Outreach, a group that provides mucking and gutting services for damaged houses; $200,000 to provide classroom materials and student services for Ingleside ISD; and $200,000 for the Mennonite Disaster Service to help rebuild homes.

This story was produced in partnership with the Ravitch Fiscal Reporting Program at the CUNY Graduate School of Journalism.