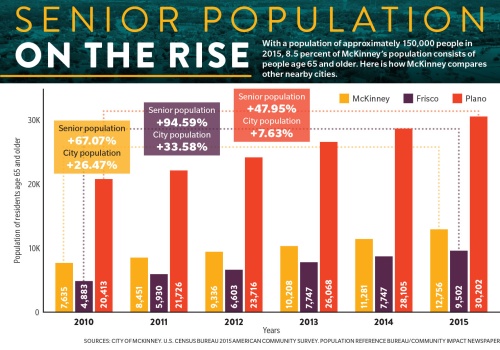 The senior population growth in McKinney is outpacing that of several surrounding cities and Collin County as a whole.

While Collin County’s senior population grew more than 50 percent from 2010 to 2015, McKinney’s population of seniors 65 and older increased more than 67 percent during the same time period, according to the U.S. Census Bureau.

“When you look at the [Dallas-Fort Worth area], for instance like Plano, Richardson, Garland … the biggest bang for their buck would be McKinney as far as buying the size of home that you want that has good access to shopping,” said Don Cook, broker and owner of Don Cook, Realtor and certified instructor for the Texas Association of Realtors.

While affordable housing is one reason seniors are moving to McKinney, Cook said proximity to children and grandchildren, along with the history and sense of community, are other reasons seniors look to McKinney.

“In Frisco, yes, you’ve got probably better shopping and better schools, but most seniors don’t really care about the schools. And as far as the shopping, I don’t think they’re ready to pay an extra $15 per square foot for housing costs just not to have to drive an extra 10 minutes to get to a mall,” Cook said. “That’s one of the reasons McKinney has such a high number of seniors.”

Most seniors want a one-story home with a spacious master bedroom, walk-in shower, an open kitchen and eating area, and three or four bedrooms on a small lot, Cook said.

Cook, who is a senior living in a four-bedroom, two bathroom home in Plano, said given today’s market, he and his wife would spend $350,000 for a home in Plano. If they were to look in McKinney, they would pay roughly $250,000 for a similar home, he said.

“If we were wanting to downsize, we would probably look to a city like McKinney,” Cook said.

Neighboring Frisco has no developments for seniors that accept housing vouchers, according to the U.S. Department of Housing and Urban Development. Plano has two options from which to choose.

Newsome Homes, located at 1450 Amscott St., McKinney, was renovated in May and now offers 180 one- and two-bedroom apartment units restricted to those age 55 and older. Miller said about 93 percent of the units are occupied, and the remaining will soon be filled as applicants on the waiting list continue to be processed.

Location
The North Texas area, including Frisco and Plano, has become an employment hub over the past few years with companies like Toyota and JP Morgan Chase moving to the area and developments like Legacy West and The Star in Frisco opening.

This job growth has caused many families to move to North Texas, which in turn results in the relocation of seniors to the area to be near their families.

McKinney residents have easy access to nearby cities given that the city is bordered by Frisco to the west, Plano to the southwest and Allen and Fairview to the south.

McKinney is also a county seat and provides a historic backdrop, Cook said.

“Now, you could take that to an extreme because you could go up to Sherman and Denison and get a lot of the same historic feel,” he said. “But you’re too far away from the Metroplex and most people my age want to live [close to] our children and grandchildren.”

McKinney senior amenities
The history found downtown on the square and its walkability also draws seniors to McKinney.

“There’s something nostalgic about something like [the square],” Cook said. “It makes it easy to stroll and it’s just—it’s comfortable.”

In addition to downtown, the city also offers a variety of amenities, including parks and walking trails, the Senior Recreation Center and the Apex Centre.

The Senior Recreation Center, which caters to those 50 and older, has 2,600 active household members, Laura Cegelski, senior recreation supervisor at the Senior Center, said in an email.

“The Senior Recreation Center has seen a dramatic increase in membership over the past few years,” she said. “The two common denominators that we are seeing amongst the new membership is one, retirement, and two, members moving to be closer with their families.”

The Apex Centre, an aquatics and fitness center located at 3003 Alma Road and less than a mile from Emerald Cottages of Stonebridge, has a large senior membership.

Teresa Thomason, manager of the Apex Centre, said seniors are the second-highest membership group. As of Nov. 14, families make up 77 percent of the members and seniors make up 13 percent, or 694 members.

To accommodate for this growing population, the recreation center offers seniors a reduced membership fee. The Apex Centre also has group programs and an eighth-mile indoor walking track, which are appealing to the senior population, Thomason said.

“Our senior population is really active,” she said. “So if [the class schedule] says deep water aerobics, don’t think that’s just young people. There’s a great mix of both young and old. And that’s another thing that’s really great to see is that all ages are participating in these programs.”

Socialization is another component McKinney offers.

“It’s great [seniors are] active, but we’re also seeing those relationships develop,” Thomason said. “That community atmosphere is why people are moving here—because we have that really [intimate], close feel.”