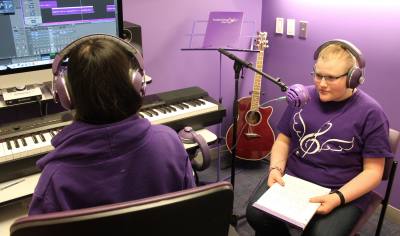 A childhood cancer survivor returned to Texas Children’s Hospital in Katy in late November, not for treatment or a checkup, but to record a single. Emily Freeman is a veteran artist of Purple Songs Can Fly, a nonprofit that allows cancer patients to write and record original songs.

Songwriter Anita Kruse founded the group in 2006 at Texas Children’s main campus in Houston. Since then, Purple Songs Can Fly has recorded about 2,000 songs, released six compilation CDs on purple discs, created a musical and sent its songs around the world and even to the International Space Station.

The group opened a second recording booth at Texas Children’s Hospital-West Campus in June and with a grand opening in early November.

“Typically, it is just for [patients], for their family and some of them maybe don’t even want to share it with their family,” Kruse said. “It might end up being therapeutic, but really the goal is just to have a creative experience.”

Children who are too ill to come into the studio can record using portable equipment at their bedside, Kruse said.

She and sound engineer Annalisa Cuano said song topics can run the gamut: from faith and hope to what the child wants to eat for lunch that day. Patients may record songs only for themselves or for a loved one they may be thinking about as they undergo treatment.

Freeman, now 22 years old, was 13 when she was diagnosed with a brain tumor that damaged her eyesight and brought her dancing career to a halt. With help from Purple Songs Can Fly staff musician Aaron Kaufman, she wrote her first tune, “I Want To Get Back (Up On Top),” in 2009.

“It was great thing to get my mind off what I was going through,” Freeman said. “To be able to write a song, just relax and chill, basically, was really awesome. I loved it.”

The group plans to screen a documentary about that show in June 2018, Kruse said. Purple Songs Can Fly is supported by donations and grant funding, and the group does not charge patients nor families for the songs they record.

“With Purple Songs Can Fly, it is not difficult to find lyrics—to find a topic to write a song about,” Freeman said. “They really make it easy.”

Lately, Freeman said she has been inspired by her 18-month-old niece to record several lullabies for infants at Texas Children’s main campus. On Nov. 30, she wrote a new song with Kruse and Cuano at the controls.

Cuano also helps patients with songwriting and said the process is meant to be as organic as possible.

“I guess, as a first step, it’s most important to, sort of, engage the child, just to see where their interests are … kind of find an opening to see something they like and then turn it into a song,” she said.

Kruse is in talks to open a third booth at Texas Children’s Hospital-The Woodlands but said she does not foresee expanding the nonprofit beyond the hospital system. While some donors receive the group’s compilation albums, Purple Songs Can Fly recordings are not intended for mass distribution, Kruse said.

“Really, the goal is not for them to come in and write to share it. The goal is just to write songs and have that for that experience—that creative experience,” she said.