Lake Houston area getting back to business after Harvey 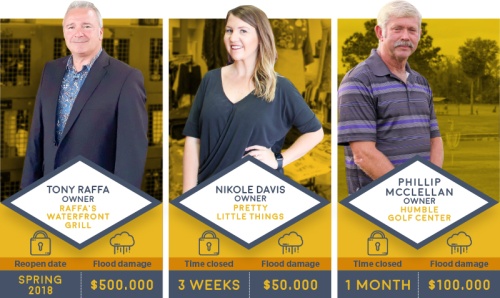 Tony Raffa suspected his restaurant had sustained maybe a foot of water as he and his wife, Leslie, waded through the waist-deep floodwaters along West Lake Houston Parkway on Aug. 31.

He and Leslie had braved flooded roads to move computers, wine bottles and equipment to the tops of tables and counters at Raffa’s Waterfront Grill a few days prior on Aug. 28. By then, Hurricane Harvey was already in the process of dropping more than 30 inches of water on the Lake Houston area.

However, they returned to find Raffa’s had taken on 5 feet of water, destroying all of his kitchen equipment and many of the items they had attempted to save. The damage could exceed $500,000, not including the lost revenue that will continue to add up until Raffa’s reopens next spring, he said.

“I never in a million years dreamed it would be 5 feet in there,” Raffa said. “I’d probably be open now if we had a foot of water because it wouldn’t have ruined all of my equipment, but the level that we got was devastating.”

More than 75 flood-damaged businesses in the area have reopened since Harvey and nearly 25 additional companies have plans to reopen by February, according to the chamber.

Once the Sheetrock is gutted, carpet is pulled up and damaged property is thrown away, Raffa said business owners shift their focus to securing the funding to reopen.

Many owners then begin the process of applying for grants and low interest loans, Armstrong said.

About 30 businesses have each received  $10,000 in grant funds so far, said Corinn Price, director of community involvement for Insperity. However, the program will be wrapped up in December after distributing about $2 million to residents and businesses, Price said.

“It’s not going to solve all of their problems—$10,000 is not going to fix their business,” Price said. “But it’s more that somebody has said, ‘Yes.’ Somebody is saying, ‘I’m there to help you, and we’ll do everything that we can.’”

Pretty Little Things, a clothing boutique located in Kings Harbor has benefited from the program, owner Nikole Davis said. The floodwaters reached the length of Davis’ shoulder, destroying all of her clothing, electrical systems, barcode scanners and computers, she said.

Davis said the Lake Houston Area Relief Fund helped the clothing boutique open a temporary location in Atascocita three weeks after Harvey, adding that losing revenue for a long stretch would have been difficult to overcome.

She said she hopes to reopen in Kings Harbor in February.

“The first day we opened the pop-up [shop], we did Black Friday numbers,” Davis said. “We had people coming in to shop that their homes flooded also.”

While the SBA is offering low and high interest loans, it also provides counseling for small businesses. The Lone Star Small Business Development Center, which is affiliated with the SBA, also offers consulting and crisis counseling services.

The SBA has given out more than $150 million in loans to small businesses in the Houston area that were affected by Harvey, Jeffcoat said.

“We’ve already assisted more than 1,500 Houston businesses and more than 24,000 homeowners with more than $2 billion in assistance,” he said.

The chamber is also pushing businesses toward LiftFund, which is offering no interest loans up to $25,000 to businesses affected by Harvey, Armstrong said. LiftFund is an SBA-approved lender that offers loans to entrepreneurs, she said.

The bill features several incentives for business owners and individuals, such as a deduction for personal casualty losses on their tax returns, penalty-free access to retirement funds and disaster-related employment relief.

Disaster-related employment relief—a tax credit for employers who paid workers while the business was shut down due to a recent hurricane—will be beneficial to local business owners, said Mark Mitchell, president of the Lake Houston Economic Development Partnership.

“The credit is designed for all businesses that were negatively impacted by hurricanes Harvey, Irma and Maria,” Mitchell said. “Or if they were inoperable for any amount of time and they actually paid employees that did not perform services, they designed a credit.”

HR 3823 also includes a credit for business owners who paid individuals to help during cleanup and recovery operations before the flood-damaged businesses reopened, Mitchell said.

Gov. Greg Abbott also provided $50 million to the city of Houston from the state’s discretionary Disaster Relief Fund. However, state options are restricted after the legislative session has concluded, said Casey Christman, who serves as chief of staff for state Rep. Dan Huberty, R-Houston.

While most of the relief for business owners will come from the federal and state government, the city of Houston is discussing potential incentives, too, Houston City Council Member Dave Martin said. Martin’s district includes Kingwood and portions of Atascocita and Summerwood.

No plans have been decided on or approved, Martin said.

“We’re looking at ways that we can use grant money to attract these businesses back,” Martin said.

The Atascocita branch of H&R Block is hosting Tax Talks, a series of seminars for small-business owners and individuals like Phillip McClellan.

McClellan owns Humble Golf Center, his home and three homes previously owned by relatives on Sorters Road in Kingwood. All five structures were flooded during Harvey.

McClellan and his wife now live at the Humble Golf Center, perhaps permanently, as they decide what to do with their homes, McClellan said. The business reopened a month after the flood, he said.

“A small business like us—a mom and pop thing—we’re busy just trying to survive from day to day,” McClellan said. “Trying to figure out where we’re going to sleep tonight, eat and how we’re going to get back open. Our cash flow— that was our income.”

Tax Talks will help employers navigate the new Earned Income Tax Credit, which was implemented in Hurricane-affected areas this year and allows business owners to have the option to use last year’s income versus this year’s income on their tax return, office manager Bobby Baker said.

“Because we are a federally declared disaster area or zone, the rules for casualty changed, and they’re not going to know that unless they talk to someone who has been through the training,” Baker said.

Despite the challenges, Raffa said he never considered closing his restaurant.

“They say, ‘Why would you want to go back; you had 5 feet of water in there.’ But my wife and I both agree that Kings Harbor is a lifestyle for the residents of Kingwood and Atascocita and the Lake Houston area,” Raffa said. “The community needs us because those amenities in that area add to people’s lives.”
SHARE THIS STORY