TxDOT plans new lanes, major reconstruction of I-35 in Austin 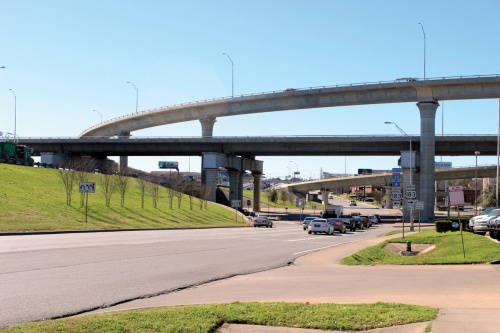 In January 2018, the Texas Department of Transportation begins work on I-35 at US 183 to add three new direct connectors between the two highways.

An $8.1 billion plan to improve traffic on I-35 could have big results for Central Texans—but not without major headaches for South Austinites during years of construction.

On Oct. 30 the Texas Department of Transportation unveiled its updated Mobility35 plan for Central Texas. Included were two additional lanes that could be tolled in each direction between Round Rock and Buda, depressed main lanes through downtown Austin, additional improvements throughout the three counties and no change in the existing number of nontolled lanes.

“It will be messy, particularly downtown when we reconstruct I-35,” said Terry McCoy, Austin district engineer for TxDOT. “We’ll do the best we can in phasing that, but there will still be some impact on the traveling public.”

Having endured extensive construction along the interstate, some South Austin residents question TxDOT’s ability to conduct the project in a safe and timely manner. Interstate projects have resulted in years-long delays, leading the community to doubt a project’s intended timeline, said Mario Cantu, chair of the South Congress Combined Neighborhood Plan Contact Team.

“Since there is a well-defined history of timelines that were prolonged for many years of what was initially gauged, we have to look at this project and figure out what is the timeline and what is the budget,” he said.

Planning for I-35 improvements in Central Texas began in 2011 after the Texas Legislature earmarked $300 million to improve mobility in the state’s most congested corridors. Central Texas received about $31 million of these Rider 42 funds. TxDOT released its implementation plans in 2014-15.

If the new lanes on I-35 were to be tolled, TxDOT would face challenges in funding those lanes because monies from propositions 1 and 7 cannot be used to build tolled facilites.

“We have other sources of funding that we’re looking at, and we’ll really look under every cushion on the sofa to try to pull this together,” McCoy said.

Additionally, in a Nov. 16 letter to the chairman of the Texas Transportation Commission—the governing board for TxDOT—Lt. Gov. Dan Patrick stated he opposes TxDOT’s plans to add toll lanes on 15 projects in the Unified Transportation Plan, the agency’s 10-year plan for construction, development and planning activities.

Austin Mayor Steve Adler laid out three options he sees for funding improvements. The first is for the Texas Legislature to fund more infrastructure in the next session or to allow for public-private partnerships to leverage dollars. The third option would be for state lawmakers to step out of the way and let local jurisdictions figure out funding.

“It’s a state and national project,” he said. “Everybody in all levels needs to participate.”

Adler also expressed support for depressing the main lanes of I-35 in downtown Austin and removing the upper decks. He would also support capping the depressed lanes so that infrastructure, such as a park, could be built on top—an item TxDOT said it would not fund.

Construction of the four additional lanes, if funded, would not begin until at least early 2021 when several other key regional projects are completed, McCoy said. This is to give travelers more options to get around the region and provide reprieve from construction.

Construction of the four new lanes likely would begin in downtown Austin first, McCoy said. TxDOT is still working out how to fit the lanes, but he said in areas with the least amount of right of way, TxDOT likely would have to build two levels below ground—one level for any new lanes and one for existing main lanes—to have the frontage roads and cross streets remain at surface level.

TxDOT ultimately plans to extend the additional lanes through Hays and Williamson counties, but McCoy said the plan is to prioritize the area with the most congestion: downtown Austin.
Transit planning

TxDOT is also working with Capital Metro on incorporating transit in any additional lanes.

Capital Metro is studying transit on I-35 as part of its regional high-capacity transit plan called Project Connect. Todd Hemingson, Capital Metro’s vice president of strategic planning and development, said the original plan was to build bus stations in line with proposed toll lanes, but that likely would not happen because the four new lanes would take all the right of way.

Although Capital Metro is continuing planning and conversations on what type of high-capacity bus service would work on I-35, Hemingson said it is essential to offer it.

As with any major transportation projects intended to alleviate traffic, some residents question whether the issue could have been dealt with
pre-emptively.

“The growth in the city and the growth in traffic has not been kept up with,” said Mike Rodriguez, president of the Onion Creek Homeowners Association. “In general, I-35 crowding starts by city policies that drive people to live in suburbs like Buda and Kyle and maybe even beyond.”

Rodriguez said his community has experienced first-hand how extensive construction on I-35 can lead to unsafe conditions for residents along the interstate. To avoid traffic, motorists opt to travel along the access roads at highway speeds, he said.

“My concern is that I-35 is a lifeline for us,” he said. “When we come out of this neighborhood and we want to go north or south, we have no choice but to use the interstate.”

“The whole thing from [Onion Creek] to Ben White has been dangerous for some time,” he said. “[TxDOT] should concentrate on a given area and finish that before moving up the road, instead of screwing up the lanes from here to downtown,” he said.

And although he said he recognizes the need to generate funding, Rodriguez said toll lanes favor certain individuals.

“Some variation [in toll cost] is fine, but there should be caps to address affordability for the people involved,” he said.

Cantu said addressing the root of Austin’s traffic problem—continued development and increased population—is crucial before performing “surgical intervention” on I-35.

“To me I-35 is like a human being,” he said. “When a human has a clot in their artery, the blood flow does not go through, and drastic things start to happen. That is what will happen here. With the amount of traffic that is there now or is forecasted, how do we keep it flowing? We have to ensure that when surgery is done, the outcome is great.”